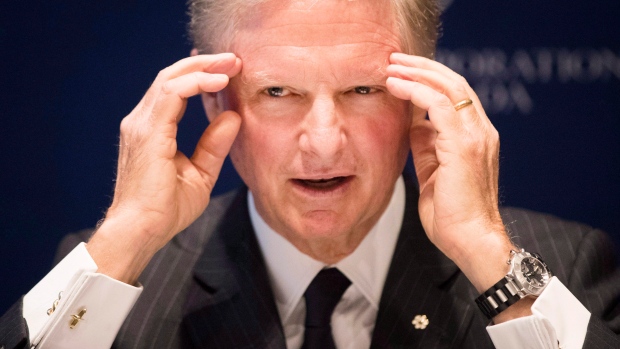 Paul Desmarais Jr., Chairman and Co-Chief Executive Officer of the Power Corporation of Canada, speaks during a press conference following their annual shareholder meeting in Toronto, Friday, May 12, 2017. , THE CANADIAN PRESS/Mark Blinch

Power Corp. of Canada, a holding company controlled by Canada’s billionaire Desmarais family, is moving into private credit with the launch of its first fund targeting middle-market lending.

Sagard Holdings ULC, a subsidiary of Power Corp., raised an initial US$260 million of capital from Healthcare of Ontario Pension Plan, BRK Capital, Walter Financial, a large Canadian corporate pension plan and from its own capital, according to a statement on Thursday. The Sagard Credit Partners LP fund aims to raise a total of US$500 million by the end of the year to lend to family- and founder-owned companies and smaller public firms.

The seven-year closed-end fund is targeting a 10 per cent-to-12 per cent net return annually by making senior secured loans across sectors in North America, but with a focus on Canada, Adam Vigna, Sagard’s chief investment officer, said in a phone interview. The typical deal size will be US$10 million to US$40 million, said Paul Desmarais III, executive chairman of Sagard Holdings and a senior vice president of Power Corp.

“That is a unique space and combining our reputation, our operational capabilities, and a real desire to build great companies with entrepreneurs, I think that provides a unique product for some of the large asset pools,” Desmarais III, 35, said.

Sagard Credit Partners closed its first investment in May 2017 to Calgary-based Founders Advantage Capital Corp., a credit facility with a US$42 million initial draw.

The credit team has looked at 225 deals since January 2017, and has two more investments set to close this month, including one with a family-owned U.S. health-care company, said Vigna, who previously was head of principal credit investments at Canada Pension Plan Investment Board. He left CPPIB in fall 2016, bringing three associates with him to form Sagard’s credit team.

Moving into private debt is the latest strategy for Sagard Holdings, which has invested in public and private equity since its founding in 2005. Power Corp., the Montreal-based holding company, has also been expanding into new ventures, particularly investment in fintech, as it seeks to adapt to competition to its traditional insurance and mutual fund businesses.