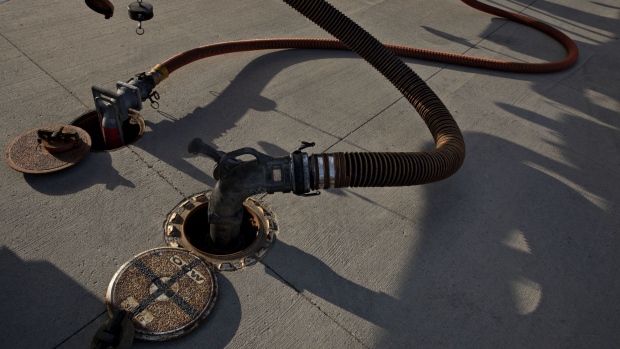 Fuel lines sit connected to underground storage tanks as fuel is delivered at a Phillips 66 gas station in Princeton, Illinois, U.S., on Wednesday, April 1, 2020. Even with the combination of some Canadian pullback, stripper wells going offline and announced shale cuts, that may not be enough to stop oil prices from going lower as demand craters and supply from OPEC means major increases in stockpiles in the second quarter. Photographer: Daniel Acker/Bloomberg , Bloomberg

(Bloomberg) -- From Russia’s northeastern coast of Sakhalin to the Permian basin in the U.S., oil is going cheap as sellers slash prices in a desperate attempt to attract buyers.

Refiners across the world have made deep cuts to crude-processing rates due to slumping consumption and a growing fuel glut, leaving producers struggling to find buyers for their cargoes. Sellers, meanwhile, are aggressively dropping the price of their oil while they tussle for the remnants of demand, with the prospect of forced output cuts looming as global storage swells.

In recent days, benchmark crude prices have rallied in the financial markets, primarily due to speculation that the world’s largest producers might reach some sort of truce to halt the price war. However, gloom persists in the physical markets, where actual barrels of oil are bought and sold, with crude still trading well below benchmark levels.

For example, the spot differential for Russia’s Sokol was at a discount of about $8 a barrel against Dubai crude this week, according to traders who asked not to be identified. That’s the lowest in more than five years and a whopping $11 less than the last reported deal for the grade. Australia’s Varanus traded at a discount of between $13 and $14 against London’s Dated Brent, compared with a 50-cent premium for the previous cargo.

U.S. crudes have declined to multi-year lows against benchmark Nymex crude oil futures because suppliers are running out of space to store barrels.

Last week, the discount for West Texas Intermediate crude trading in Midland, Texas, America’s shale capital, fell to the lowest level since 2018. Offshore grade Heavy Louisiana Sweet oil plunged to the weakest discount to oil futures in data going back to 1991. Another offshore crude Mars Blend, a regional sour benchmark, tumbled to the lowest level in over a decade.

Storage tanks the world over are filling fast, including at the 45 million-barrel Saldanha Bay terminal, a key hub in Africa. Scores of supertankers have also been charted for long-term plays, to be used as floating storage.

“One could argue that currently there is a disconnect between the futures prices and the physical differentials which is pointing towards a more distressed market,” researchers at the Oxford Institute for Energy Studies said in a report.

The study noted that the movement of price differentials -- the gap between the price for physical crude and its benchmark -- has been more extreme than for futures prices. It also highlighted that the weakness in grades like CPC Blend and Murban is due to high yields of jet fuel and naphtha, a component in gasoline production.

The consumption of jet fuel to gasoline has plummeted as governments try and curb the spread of the coronavirus pandemic by forcing people to stay at home. While China remains a bright spot as people return to work and factories begin to reopen after a prolonged shutdown, activity at Indian ports has slowed and the nation’s refiners are curbing processing amid a crippling lockdown.

However, oil traders still have their sights on sending unsold crude to Asia, even as refinery margins in the region swing between profits and losses. The market phenomenon known as super-contango, where prompt crude prices are sharply below cargoes for delayed delivery, means that the cost of chartering a tanker can be offset by such gains, making the strategy viable.

Even so, the question is where exactly in Asia can they send their supplies right now to get some relief. Recently, a tanker that was initially booked to send U.S. crude to India, based on fixture reports, was sent to China instead. Indian refineries have issued force majeure notices to defer their crude deliveries because the virus-led quarantines have crushed fuel consumption.

(Updates with details on U.S. crude market activity in fifth and sixth and final paragraphs.)