After a disappointing 2021, investors may be wondering whether this is the year cannabis stocks spark back up.

With valuations at multi-year lows for many U.S. and Canadian pot stocks, 2022 could be a buying opportunity for savvy investors willing to take a bet on a potential market that is expected to surpass the US$50 billion mark in 2025, according to industry consultancy New Frontier Data.

Cannabis still carries a significant amount of risk for investors. Rising demand during the COVID-19 pandemic and a boom in the number of licensed stores pushed sales in Canada to about $4.2 billion last year, while Americans snapped up US$25 billion worth of marijuana. Nevertheless, valuations for the companies that produce the stuff took a dramatic tumble.

"Things are looking very, very cheap right now," said Nawan Butt, portfolio manager at Purpose Investments and the manager of the firm's cannabis fund. "The overall risk-off sentiment in the market is causing some of the downside in cannabis right now."

Closer to home, Canopy Growth Corp., backed by U.S. alcohol giant Constellation Brands Inc., saw its stock fall by two-thirds in 2021. Tilray, which leads the Canadian market with a 12 per cent share of sales, trimmed its valuation by nearly one-quarter. Auxly Cannabis Group Inc., another major player that rapidly increased its market share in 2021, lost half its value last year.

"There's a lot of growth in the Canadian market but the problem is where it's going." - Andrew Carter, an analyst at Stifel

Those declines came amid a broad struggle among industry players to become profitable while operating in a hyper-competitive market with nearly 300 producers selling into the recreational space across the country, coupled with a fickle consumer base and an ongoing price war with a still-relevant illicit market.

Craig Wiggins, managing director of The Cannalysts Inc., an independent cannabis research firm, maintains a bearish view of the sector.

"It's uninvestible," he said in an interview. "Until someone shows progress, which I define as an increase in sales greater than how the market is growing, and your gross margin is positive in a sustainable way, and you can cover your [selling, general and administrative expenses], there's no company right now that can meet that very low bar."

Wiggins added that a catalyst that could drive investor interest in the Canadian space would be a move by federal regulators to tweak some of the more onerous regulations that have weighed down the industry, such as reducing excise taxes or opening up cannabis-infused beverages to more retail options.

Health Canada will likely make its amendments to the Cannabis Act sometime in 2023 but there's no certainty anything game-changing will come out of the regulator's mandated review of the country's legalization bill.

Consolidation is likely to be a running theme that plays out in the Canadian cannabis industry. The current landscape appears to be wildly unsustainable with roughly 800 licensed producers able to cultivate cannabis in Canada, one-third of which also sell into the recreational market. Butt sees six major players emerging to control roughly 70 per cent of the market in the next three years.

"Canada, overall, we think is a market that supports oligopolistic structures," he said. "We see that in banking and in telecom and eventually in cannabis." 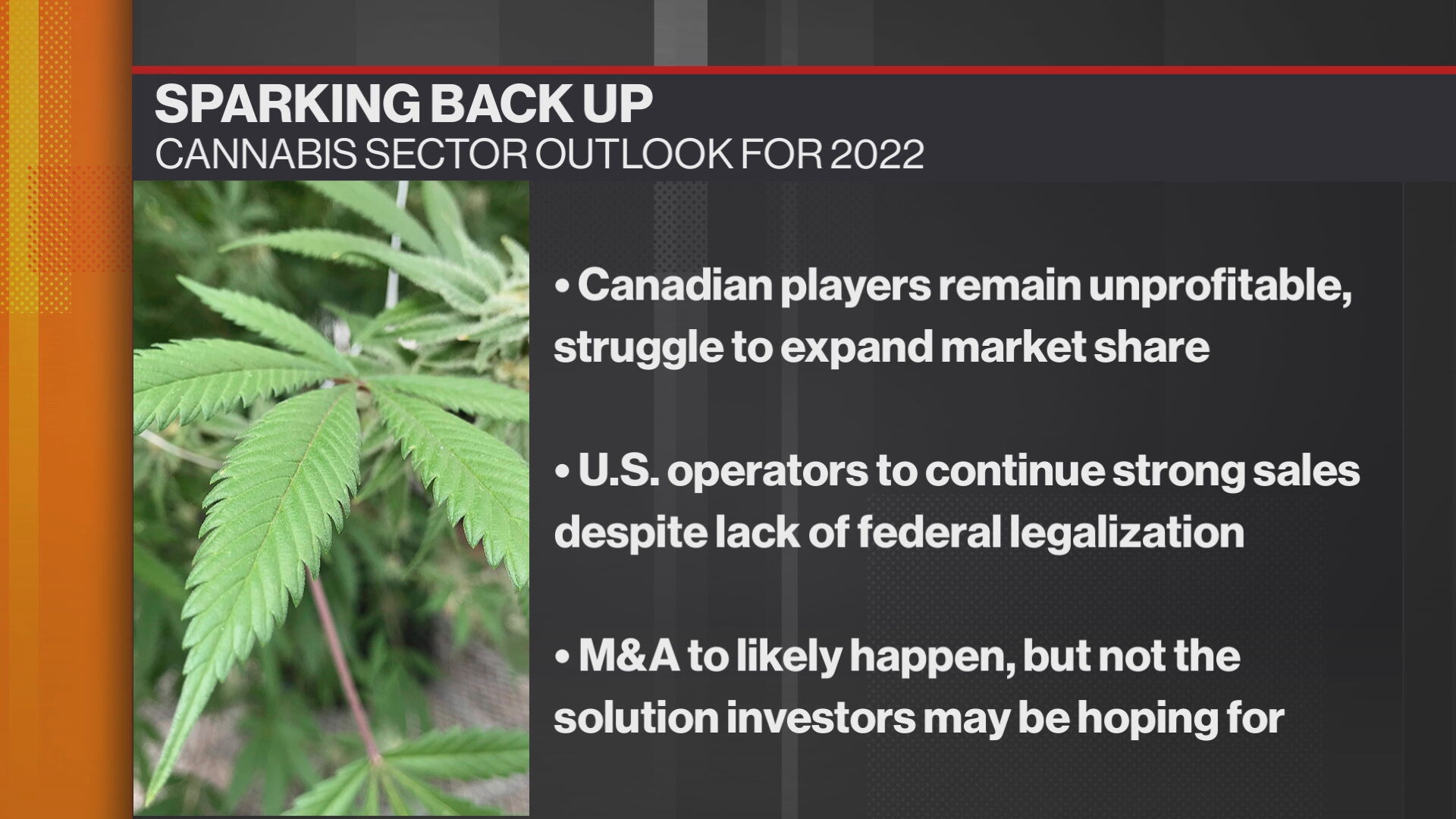 Carter, however, takes a more reflective view on whether M&A will be the answer to the Canadian industry's woes. He thinks that nearly all of the consumer brands sold in Canada haven't generated significant consumer traction, leaving a dearth of attractive M&A opportunities for companies looking to pad out their top line.

"To sit there and say consolidation is a silver bullet, I'm not really sure. I think most things need to go away by attrition," Carter said. "I'm not sure what you're acquiring other than somebody else's assets which probably aren't worth up to 50 cents on the dollar of what they built it for."

Wiggins notes that companies aren't just buying brands or facilities - they're also buying their baggage, which will make it challenging for some cannabis operators to integrate any potential acquisition targets.

"You can cut facilities and mothball facilities in short order. You can't do that with debt," he said.

Indeed, the biggest driver for the cannabis sector is undoubtedly when the U.S. legalizes the drug federally. While 37 states already have legalized medical marijuana and 18 states allow the sale of cannabis for adults over the age of 21, the sector won't be meaningful to investors until U.S. lawmakers pass federal reform bills, according to Wiggins.

As well, U.S. pot companies have significant tax burdens due to cannabis' federal illegality that prevents them from deducting normal business expenses for tax purposes. A report from Eight Capital finds that correcting this tax treatment could see U.S. multi-state operators' shares grow by as much as 61 per cent.

There’s a lot to be bullish about when it comes to U.S. cannabis: Canaccord Genuity’s Bottomley

Matt Bottomley, director of equity research at Canaccord Genuity, joins BNN Bloomberg for his outlook on the cannabis sector heading into next year. Bottomley expects the U.S. cannabis sector to generate U.S. $30B in revenue in 2022, with his top stock picks being Trulieve Cannabis Corp and Ayr Wellness.

Earlier attempts from both the House of Representatives and the Senate to pass pro-cannabis legislation ranging from full legalization to allowing banks to do business with pot companies signal that momentum is there, but industry observers don't expect anything will be passed ahead of upcoming U.S. midterm elections.

"There's a better chance of nothing happening federally than something that would," Wiggins said. "Once [Senate Majority Leader Chuck] Schumer gets all the bills passed that take way more priority than cannabis like infrastructure, those need to be cleared and they're not clearing them relatively quickly."

The legalization progress is expected to be incremental, allowing the bigger U.S. pot companies to insulate themselves with better access to capital. Curaleaf struck the industry's largest debt deal last month with a US$425-million private placement of 8.0 per cent senior secured notes due 2026, Butt pointed out, adding that smaller operators may continue to struggle and be forced to sell.

"For us, the biggest thing is discussion," said Butt. "If you can have an active discussion about [legalization] that is by far the biggest positive sign for a turnaround in the industry as far as valuations are concerned."

"I think they're better positioned to capture growth in those markets with agnosticism about whether they are a first mover [in a legal U.S. state.]," Carter said.