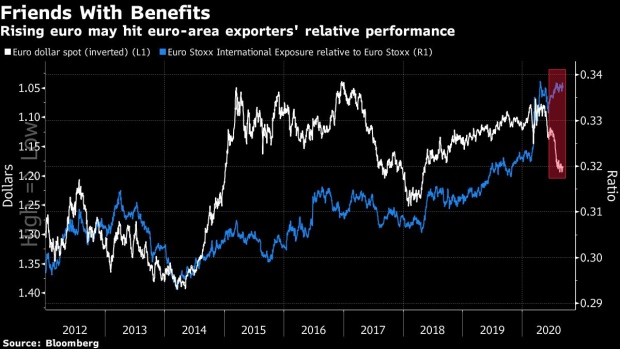 (Bloomberg) -- The dethroning of the dollar from its pandemic supremacy is changing the trading game across stocks, emerging markets and commodities.

After a more than 10% fall since the March maelstrom, the U.S. currency is under pressure from surging risk appetite, falling inflation-adjusted interest rates and even rising optimism in Europe.

As the Federal Reserve this week gears up to maintain its dovish stance, a chorus on Wall Street is calling time on the greenback’s multi-year bull cycle.

With that in mind, here’s a cross-asset playbook for the world’s reserve currency.

In stock land, American exporters are recovering faster from the pandemic than companies reliant on domestic sales, aided by the weaker dollar. A Goldman Sachs Group Inc. basket of stocks with international exposure has gained 46% since mid-March compared with 32% for domestically oriented peers.

In Europe, where the common currency is trading near a two-year high versus the greenback, a mirror image is emerging. As regional goods become more expensive in foreign-currency terms and less competitive abroad, international companies in European indexes are feeling the heat.

“A global exporter is at the epicenter of the negative impacts of euro strength,” said Edward Park, deputy chief investment officer at Brooks Macdonald Asset Management. “We expect European indices to remain under pressure because of euro strength.”

With a weak dollar abetting a U.S. recovery and helping to fan market-derived expectations of consumer price growth, Savvas Savouri at Toscafund Asset Management recommends switching out of conventional Treasuries and into inflation-protected securities.

“The simple reality is that the only feasible way to get the U.S. to the preferred inflation target is through a dollar devaluation,” said the chief investment officer.

For developing country borrowers, a weak dollar is naturally a boon by immediately easing refinancing costs in foreign-currency terms. And for equity investors, history is on their side. Developing stock markets have notched big gains over the decades that the U.S. currency fared the worst, according to Bank of America Corp. research.

The dollar’s decline has also helped thrust gold onto center stage, since the two are considered to typically move in opposing directions. Though the relationship isn’t straightforward, the greenback’s descent as real yields plumb fresh lows is being met with outsize demand for gold.

Going forward, some investors are betting that bullion will prove a better haven than Treasuries as inflation bites -- another example of the interplay between the dollar, U.S. rates and cross-asset trades.