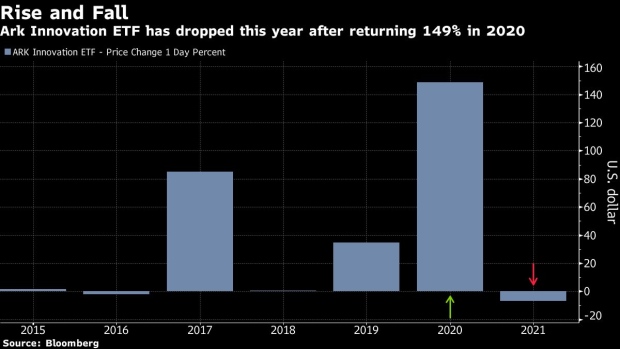 High-profile hedge fund investors such as Michael Burry, made famous by “The Big Short” movie, have disclosed short positions against Wood’s flagship exchange-traded fund, while some appear to be trying to spar with her on social media and an anti-Ark ETF is also in works.

Semper Augustus Investments Group LLC’s Chief Investment Officer Chris Bloomstran took to Twitter overnight to make some observations on what he makes of Wood’s Ark Innovation ETF and the shorts against it. He explained the nuances of valuations and return ratios to Wood in some of his posts.

The upside is that six of the ETF’s top 10 holdings are making money, while “the bad news is the P/Es are somewhat higher that I’m accustomed to seeing,” Bloomstran wrote in a Twitter thread. “What I concluded is you and your team team must be counting on growth. Lots of it.”

Wood’s main fund and her firm Ark Investment Management LLC attracted billions of dollars in the past year after her thematic tech-focused bets trounced the market in 2020. But Wood and Ark have struggled to maintain momentum amid concerns about lofty prices and accelerating inflation.

Her main fund is down about 7% this year after returning 149% in 2020 to rank among the best-performing ETFs in the U.S. and make a star out of Wood. It’s set for its first annual loss since 2016.

Wood has so far only rebutted Burry among her detractors. She said in a Twitter thread on Tuesday that, while Burry made a “great call” in the mortgage market, she believes he doesn’t understand “the fundamentals that are creating explosive growth and investment opportunities in the innovation space.”

While she may have her critics, Wood has been ahead of many peers in paring holdings tied to Chinese technology giants amid the nation’s sweeping crackdown of sectors ranging from education to technology.

The widening regulatory overhaul underway in the world’s second-biggest economy wiped $1 trillion of market value from China shares listed globally last month. The selloff has prompted some fund managers to question their allocations toward Chinese assets.