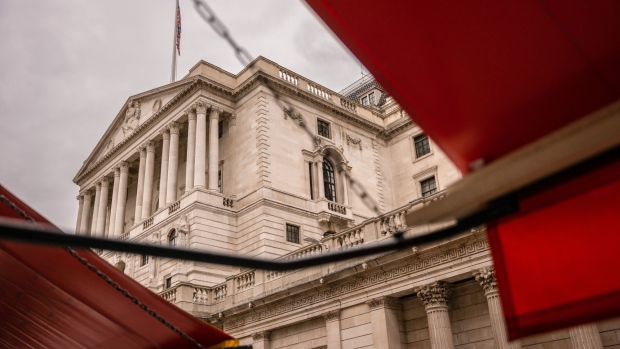 The facade of the Bank of England in London, UK, on Wednesday, Sept. 21, 2022. The Bank of England on Thursday is set to raise interest rates and start selling assets built up during a decade-long stimulus program, a historic tightening of monetary policy designed to clamp down on inflation. , Bloomberg

(Bloomberg) -- The Bank of England needs to unleash a sizable interest rate hike outside of its normal decision-making cycle in the wake of “historical drops” in the pound and gilts, according to George Saravelos, global head of foreign exchange research at Deutsche Bank AG.

In a note released during a rout in UK markets after Chancellor of the Exchequer Kwasi Kwarteng’s fiscal statement on Friday, Saravelos said the extraordinary step is needed to calm the markets. The view is his own, rather then the view of Deutsche Bank economists.

“The market is giving very strong signals that it is no longer willing to fund the UK’s external deficit position at the current configuration of UK real yields and exchange rate,” Saravelos wrote. “The policy response required to what is going on is clear: a large, inter-meeting rate hike from the Bank of England as soon as next week to regain credibility with the market.”

Saravelos also called for a “strong signal” from the bank that it is “willing to do ‘whatever it takes’ to bring inflation down quickly and real yield into positive territory.”

In the wake of Kwarteng’s statement, the pound crashed below $1.09 for the first time since 1985, sliding 3.3% in addition to declines earlier in the week. Borrowing costs on five-year government bonds jumped more than 50 basis points, the most on record for a single day, while the 10-year yield soared 33 basis points. Meanwhile traders fully priced in a 100 basis-point rate hike from the BOE at its November meeting, double the size of the move announced on Thursday that took rates to 2.25%.

Canceling the bank’s bond sales plan, announced yesterday, would be counter-productive Saravelos said, and “lead the central bank dangerously close to a path of fiscal dominance: a situation where decisions by the fiscal authority (large fiscal spending) and their consequences (higher yields), dominate over the central bank’s primary inflation objective.”

(Updates market pricing. An earlier version of this story was corrected to fix the spelling in headline)