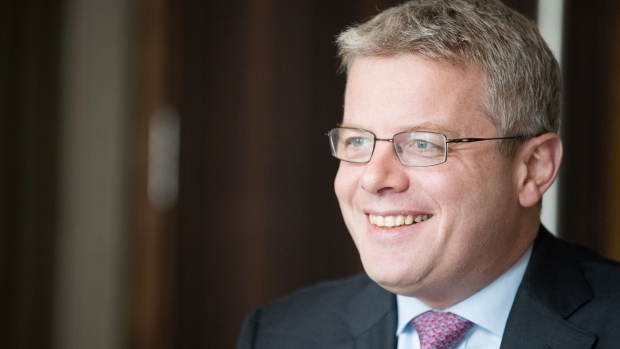 Fabrizio Campelli, head of global wealth management at Deutsche Bank AG, smiles during an interview in Singapore, on Thursday, Sept. 14, 2017. Deutsche Bank plans to push ahead with the consolidation of its global wealth-management operations, despite the negative effect on client assets in locations such as Latin America where it has shut booking centers to cut costs and streamline the business. , Bloomberg

(Bloomberg) -- Deutsche Bank AG has appointed Fabrizio Campelli to lead its investment bank, as Chief Executive Officer Christian Sewing gives up oversight of the unit to focus on the overhaul of the lender with a renewed contract.

“The realignment of responsibilities will allow the CEO to focus on cross-divisional priorities such as client centricity, sustainability and the control environment,” Supervisory Board Chairman Paul Achleitner said in the statement on Monday. “Overall, we see Deutsche Bank’s leadership well positioned, which is also underscored by the new contract for Christian Sewing.”

Revenue at the investment bank jumped by almost a third last year as clients sought to navigate the volatility cause by the Covid-19 pandemic. Both fixed-income trading, led by Ram Nayak, and underwriting of debt issues and equity capital raises, led by Mark Fedorcik, soared amid buoyant global capital markets.

Campelli earlier in March gave an upbeat outlook for the investment bank at a conference, sending shares of the lender higher. A British and Italian citizen, he has been with Deutsche Bank since 2004 and first worked in the investment bank for about five years before moving on to run the lender’s strategy division and then its wealth management unit.

Sewing took on the dual role of CEO and investment banking head as part of his decision in 2019 to pull out of equities trading and slash the division’s headcount. The decision was seen with skepticism by the bank’s regulators, who told Sewing soon after they’d prefer him to give up the role out of concern it overburdens him.

The bank also announced Monday that Chief Operating Officer Frank Kuhnke will leave the company as a result of the reorganization.