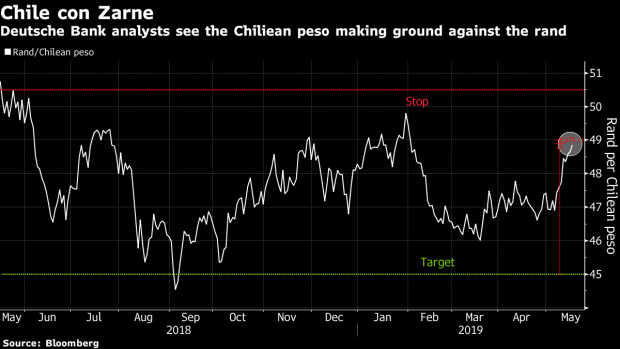 That’s what Deutsche Bank AG recommends, based on the diverging economic outlook underpinning the two currencies. Strategists David Petitcolin and Sebastian Brown are targeting a gain for the Chilean currency to 45 per rand, from Thursday’s level of around 48.8, with a stop-loss at 50.5.

The rand has advanced 1.3% against the Chilean peso this year, buoyed by a dovish global policy background and, more recently, the ruling African National Congress’s victory in general elections on May 8. The gains could be short-lived, as President Cyril Ramaphosa may face opposition to his reforms plans, Petitcolin and Brown said. The finances of the state-owned electricity company, Eskom Holdings SOC Ltd., are also a concern, they said.

“Optimism will prove short-lived as the market quickly refocuses on deteriorating fundamentals,” the strategists wrote. “We favor trading our bearish rand view against the peso, another metals exporter, but one which benefits from an ongoing growth recovery.”

It’s a brave call: the options market gives about a one-in-five chance of the cross reaching 45 in the next three months, according to Bloomberg’s forecast model. The peso weakened 0.2% to 14.74 per rand by 5:39 p.m. in Johannesburg.

To contact the reporter on this story: Colleen Goko in Johannesburg at cgoko2@bloomberg.net