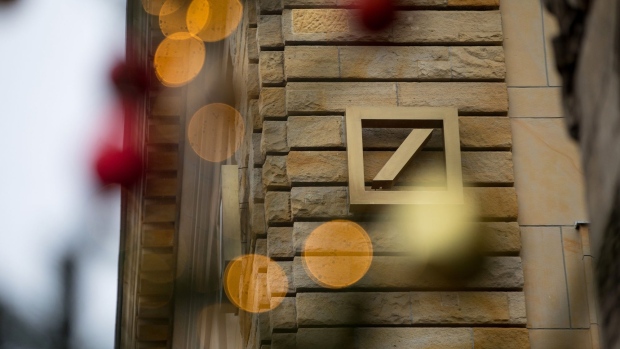 A Deutsche Bank AG bank branch in central Berlin, Germany, on Friday, Jan. 7, 2022. Germany tightened restrictions on access to restaurants and cafes and vowed to accelerate vaccinations in an effort to keep the rapidly spreading omicron strain of the coronavirus in check. , Bloomberg

The bank said Palladium Group was at fault as it defended itself against the mis-selling allegations that lie at the heart of a 500 million euro ($565 million) suit brought by the Spanish hotel chain last year. One of its ex-bankers at a key meeting with the client warned them they were making a risky bet, it said.

Deutsche Bank denied all wrongdoing in the defense papers, filed in December, and named a string of ex-employees involved in the transactions, including star salesman Amedeo Ferri-Ricchi and former heads of Global FX Jonathan Tinker and Fabio Madar.

Complex currency trades that blew back on Spanish companies have prompted lawsuits and regulatory complaints against several major banks. Deutsche Bank is now investigating whether some of its products were mis-sold. Its internal probe, known as Project Teal, is looking at dozens of such deals and has led to settlements with clients. It has played a role in the departure of several employees and senior executives.

Ibiza-based Palladium Group alleged in the lawsuit that it entered into hundreds of “highly complex” transactions with the German lender, that were “impossible” for Palladium to price, value or understand. But Deutsche Bank’s lawyers said that the family behind the group were “sophisticated and experienced market participants” with the ability and experience to understand the transactions.

“Palladium’s claim is without foundation and we will be vigorously defending ourselves against it,” a Deutsche Bank spokesperson said. “Palladium well understood both the potential benefits and risks involved.”

Palladium benefited financially from the deals it struck with the lender until 2016 but started losing money on them from 2017, with the negative value of the transactions peaking in 2018.

In the filing, Deutsche Bank detailed two meetings the hotel company had with its bankers in May 2018 in London and Ibiza. Present at one or both meetings were its then employees Ferri-Ricchi, Madar, Tinker, Thomas Berger, Miguel Palacio, Sebastian Gomez-Alarcon and Rafael Hernandes, its lawyers said.

None of the traders named in the defense are defendants in the case. Madar, Tinker, Berger, Palacio, Gomez-Alarcon and Hernandes weren’t named in Palladium’s suit as being part of the alleged wrongdoing.

According to Palladium, Deutsche Bank, through Ferri-Ricchi, owed them a duty of care. Palladium said Ferri-Ricchi was their main point of contact at the bank, although they also frequently dealt with other unnamed employees.

Tinker, Deutsche Bank said, warned them that the euro risked falling further against the dollar but Palladium believed it would recover by the end of the year. In the months that followed, Deutsche Bank said it was proved right but because Palladium had followed its own beliefs, their portfolio had lost around 334 million euros by the end of 2018.

Palladium “caused or contributed to its loss by being at fault in the care of its own affairs” including its trading decisions and failing to understand the “clear terms” of the transactions. While Deutsche Bank expressed its own views on the trading strategy from time to time, their relationship wasn’t advisory, its lawyers said.

Gomez-Alarcon, Tinker and Hernandes declined to comment. Ferri-Ricchi and Madar didn’t comment when contacted by Whatsapp and email. Berger and Palacio, didn’t respond to messages requesting comment sent through LinkedIn. Victoria Webb, a spokeswoman for Macquarie Group Ltd., which hired Palacio in 2020, declined to comment.

Ferri-Ricchi has previously denied, via his lawyers, the allegations in the Palladium lawsuit or that he was ever involved in any mis-selling. He also says he’s not involved in any internal Deutsche Bank investigation.

Madar left the bank just months after those meetings before spending a year at Barclays Plc. He also worked on selling FX products to Southern European companies including Spanish businesses. A Barclays spokesperson declined to comment.

In 2019, he joined NatWest Group Plc, where he was recently promoted to lead both the global currency sales desks and the rates sales team.