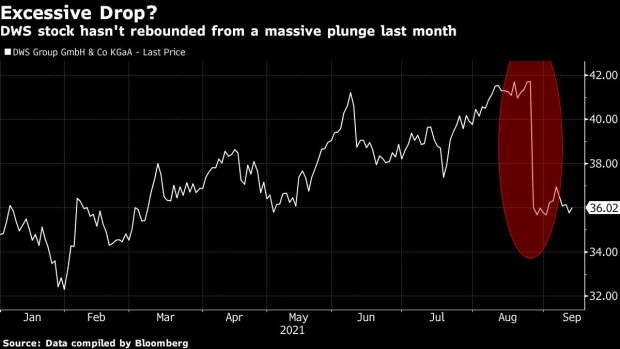 “DWS brought out a clear statement rejecting all the allegations,” Sewing said at a virtual Bloomberg News panel discussion Wednesday. “With the business development I have seen there, actually also now with analysts coming out looking at DWS, looking at these items, actually supporting DWS and further recommending it, I think this is a very strong statement.”

DWS, which is publicly listed but majority-owned by Deutsche Bank, has yet to recover from a selloff late last month as the market learned of probes by German and U.S. regulators into claims it inflated its environmental, social and governance assets. The firm has rejected the allegations, from DWS’s former sustainability head Desiree Fixler, and at least one analyst -- Johann Scholtz at Morningstar -- raised his recommendation on the stock to buy, according to data compiled by Bloomberg.

“DWS should overcome this issue and its strong ESG focus should pay off over the medium term,” analysts at Citigroup Inc. led by Nicholas Herman said in a client note published on Monday. “We struggle to see how regulators can hold DWS to account, because sustainability requirements are subjective, making it hard to enforce, even if there was wrongdoing.”