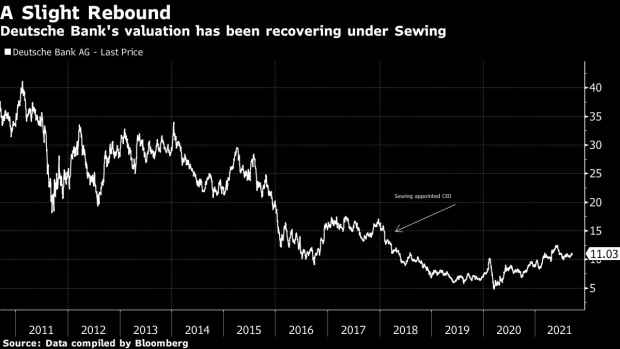 Christian Sewing, chief executive officer of Deutsche Bank AG, gestures while speaking during a Bloomberg Television interview at the bank's headquarters in Frankfurt, Germany, on Wednesday, Dec. 9, 2020. Sewing signaled that he plans to reward traders after a surge in fixed-income trading revenue at the investment bank, joining lenders including JPMorgan Chase & Co. which expect to boost variable pay. , Bloomberg

(Bloomberg) -- Deutsche Bank AG Chief Executive Officer Christian Sewing won praise from one of Germany’s top industry executives for fixing a lender once seen as the embodiment of corporate decline and financial wrongdoing.

“Deutsche Bank has done a fascinating job to come back from a pretty screwed-up bank to a trustful long-term partner again,” Joe Kaeser, chairman of Siemens Energy AG, said at a virtual panel hosted by Bloomberg TV on Wednesday. “That’s been the leadership of Christian.”

Sewing, who also attended the panel, has led Deutsche Bank to its first annual profit since 2014, by cutting thousands of jobs and refocusing the firm on corporate lending and fixed-income trading.

Once one of the world’s biggest investment banks, the lender saw its share price decline for more than a decade before the new CEO took over in 2018, as it struggled with stricter regulation and mounting bills for misconduct.