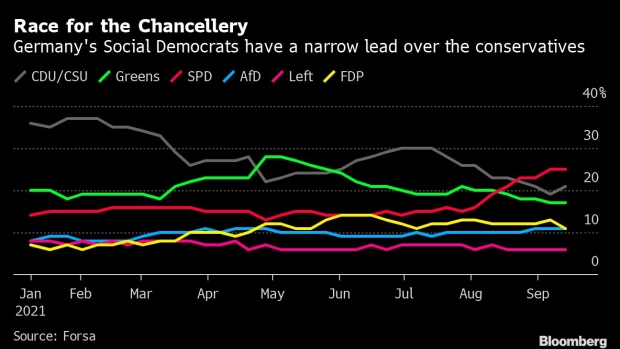 (Bloomberg) -- Top German executives called on the country’s next government to lay out a clear plan to keep Europe’s largest economy competitive, a sign of the anxiety as Chancellor Angela Merkel prepares to step down after 16 years in power.

“What we all miss a little bit in the whole election campaign is a clear outline of the European and German growth agenda for 2030,” Deutsche Bank AG Chief Executive Officer Christian Sewing said Wednesday in a Bloomberg TV panel discussion.

Joe Kaeser, chairman of Siemens Energy AG, echoed those concerns, calling for a “comprehensive plan” for the next decade, while SAP SE Chief Executive Officer Christian Klein urged the next government to create digitalization ministry to accelerate the country’s adoption of new technology.

Merkel is leaving behind a power vacuum. Days before the Sept. 26 vote, her conservatives are trailing the Social Democrats in the polls, and fragmented loyalties means three parties will probably be needed to secure a majority in the German parliament.

Finance Minister Olaf Scholz from the SPD is currently the front-runner to become chancellor, but it’s a tight race and the make-up of the government will depend on coalition discussions, which are likely to take months.

The uncertainty poses a challenge for corporate leaders. Germany’s key industries from engineering to financial services face fundamental technology changes to make the economy cleaner and more modern or risk falling behind.

The Covid-19 pandemic exposed the country as laggard in digitalization and huge delays hitting infrastructure projects have triggered concern over its competitiveness. SAP’s Klein called for the rollout of a 5G network and more incentives for startups and research and development.

“We need to invest,” but to make the spending more effective the government needs to streamline, said Sewing. “We have far too much bureaucracy in Germany. We need swifter and more decisive actions in particular also by the public authorities.”