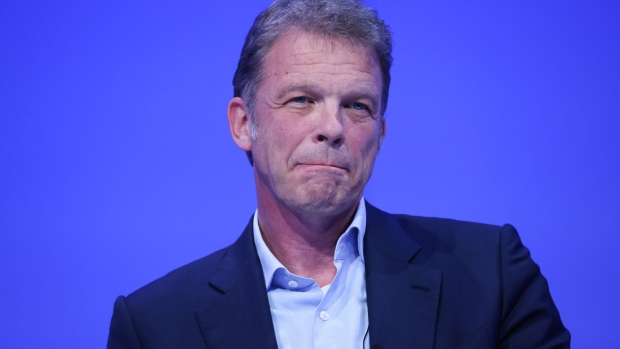 Christian Sewing, chief executive officer of Deutsche Bank AG, during a panel session on day three of the World Economic Forum (WEF) in Davos, Switzerland, on Wednesday, May 25, 2022. The annual Davos gathering of political leaders, top executives and celebrities runs from May 22 to 26. , Bloomberg

(Bloomberg) -- Deutsche Bank AG Chief Executive Officer Christian Sewing gave some of the clearest indications yet as to the bank’s priorities for taking part in European banking consolidation, signaling the importance of cultural fit and successfully exiting its restructuring before any big deals.

Sewing, speaking at the Bloomberg Future of Finance event in Frankfurt, said that the German lender needed to have it’s “own house in order” and couldn’t simply impose its culture onto that of another bank when considering potential transactions. He also said that banking union isn’t the “one and only precondition” for European M&A.

Cross-border European bank deals have been rare in the last decade as negative interest rates weighed on results and executives waited for progress on a banking union. A recent push to revive long-stalled negotiations over a single market for banks and rising rates are boosting prospects for dealmaking, though other obstacles have emerged, including the possibility of a recession across Europe.

Increasing signs are emerging of that European banks are positioning themselves behind the scenes. BNP Paribas SA has expressed interest in a potential acquisition of ABN Amro Bank NV, the Dutch consumer lender that’s been government-owned since the financial crisis, according to people with knowledge of the matter. Rumors have also swirled around Credit Suisse Group AG after a series of setbacks at the Swiss lender.

Sewing has previously said that Deutsche Bank wants to play a lead role in consolidation -- once it eventually happens -- after breaking off talks on a potential deal to take over German rival Commerzbank AG three years ago. He indicated that the bank should have its “own house in order” by end of 2022.

The CEO said Europe needs banking consolidation as the bloc’s lenders tend to be sub-scale, especially when compared to US competitors. Progress on the European banking union makes deals “far easier” even if it’s not a necessary condition.

Sewing is nearing the finish line of his turnaround plan and has said that Deutsche Bank will be in a position to pursue big deals once it’s out of that. While he has said that he would want to be the buyer rather than target, he conceded that the lender hadn’t always properly valued the importance of cultural fit in some deals.

Deutsche Bank bought US investment bank Bankers Trust more than two decades ago and it acquired German retail and mortgage bank Postbank about 12 years ago. Both purchases increased Deutsche Bank’s size but also led to years of restructuring as integrating the entities proved to be difficult.

(Updates with context about past acquisitions in ninth paragraph)