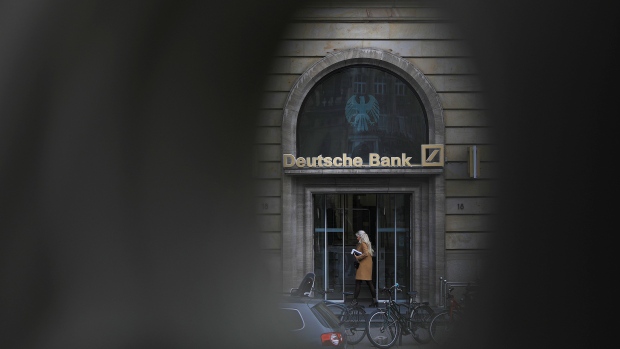 Signage for Deutsche Bank AG at the bank's headquarters in the financial district of Frankfurt, Germany, on Friday, May 6, 2022. European banks are counting the rising costs of Russia’s invasion of Ukraine as the war pushes up commodity prices and disrupts corporate supply chains. Photographer: Alex Kraus/Bloomberg , Bloomberg

(Bloomberg) -- Deutsche Bank AG is considering a return to trading residential mortgage-based securities as part of a strategy to expand the markets business that has driven much of its recent growth.

Trading head Ram Nayak has floated the idea internally as another potential step in his plan to build out the fixed income and currencies unit without the need for many additional resources, people familiar with the matter said.

The deliberations are at a very early stage and Deutsche Bank would only get involved in market-making for agency RMBS, rather than originating the debt itself, said one of the people, who asked not to be named discussing the private information.

Chief Executive Officer Christian Sewing is looking for ways to keep the momentum at the fixed-income unit as the favorable market conditions of the past years are expected to normalize. His initial turnaround plan, unveiled in 2019, was predicated on deep cuts to the trading business, but the CEO adjusted course when market volatility fueled a resurgence in buying and selling of securities.

A return to RMBS trading would mark another partial reversal of his initial strategy to focus the trading business on a few core strengths. The bank has already added high-yield credit default swaps and is now dipping its toes into base metals trading after exiting commodities almost entirely in 2013.

Nayak is trying to expand existing offerings by adding products that he sees as related, the people with knowledge of the plan said. The underlying rationale is that such products can be added without requiring huge investments in staff and other resources at first, they said.

The base metals expansion currently involves one hire and deliberations about it began about a year ago, showing the bank is careful not jump head first into businesses that it cut back after the financial crisis.

Deutsche Bank sees market-making for agency RMBS as adjacent to trading US Treasuries and other interest-rate products, and sees client demand for it, one of the people said.

RMBS bundle together mortgages into fixed-income securities that are seen as relatively low risk while yielding more than government bonds. Agency RMBS are issued by government-sponsored mortgage giants such as Fannie Mae and Freddie Mac, further limiting their risk.

Deutsche Bank has no plans to structure such securities itself and bring them to market, a business that got it into trouble when the US slapped billion-dollar fines on banks across the globe for issuing products that contributed to the financial crisis of 2008. The German lender in 2016 agreed to pay more than $7 billion to settle with the Department of Justice. Two years later, Sewing was installed as CEO.

Under Nayak, who took over in mid-2019, the FIC division has seen a jump in revenue, with analysts forecasting an increase to 8.95 billion euros ($9.45 billion) this year, up from 5.52 billion euros three years ago. Deutsche Bank has said that the market volatility that has underpinned the industrywide trading boom is likely to subside next year.