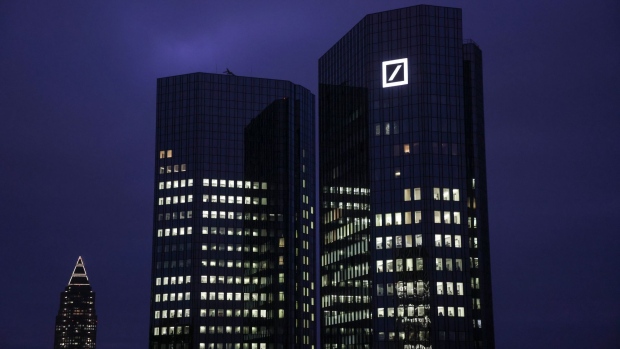 The headquarters of Deutsche Bank AG in the financial district of Frankfurt, Germany, on Monday, Jan. 24, 2022. Deutsche Bank turned the blame on an ex-client for crippling losses it suffered investing in risky foreign exchange derivatives the German lender sold. , Bloomberg

Deutsche Bank AG closed out its most profitable year in a decade by defending market share gained in fixed income trading, giving a boost to Chief Executive Officer Christian Sewing as he prepares to unveil his next strategic plan.

Income from buying and selling fixed income securities fell 14% in the fourth quarter. While that was slightly below analysts’ estimates, it was better than the average decline of 15.5% at the biggest U.S. investment banks. Profit for the year was the highest since 2011, even as costs surged in the final months on rising compensation expenses.

“In 2021, we increased our net profit fourfold and delivered our best result in ten years,” Sewing said in a statement Thursday. That provides “a strong step-off point to achieve our target of a return on tangible equity of 8% in 2022.”

Sewing, who cut thousands of jobs and refocused the investment bank to restore investor confidence, is set to outline his plan for Germany’s largest lender in March. He’s relied on a trading rally for much of the past two years to keep his plan on track as other businesses struggled to meet their targets. But as that rally peters out and competition for talent increases, he’ll have to balance investments in growth while keeping a lid on costs.

Revenue from advising on deals and capital raising helped make up for the drop in trading in the fourth quarter, rising 29% from a year earlier and posting the eighth straight quarter of year-on-year growth.

Non-interest expenses rose 11%, reflecting a 10% increase in compensation and benefits. Deutsche Bank is considering raising its bonus pool by 15%, with staff in parts of the investment bank in line to receive substantially more, Bloomberg reported on Tuesday.

Sewing has also hired several senior traders as he shifted his focus to revenue growth, and he’s had to contend with unexpected investments in internal controls after criticism from regulators. That forced him last year to book about 700 million euros in additional expenses and give up an absolute cost target in favor of a goal for a cost-to-income ratio of 70% this year.

Read more: Wall Street Is Banking on Another Year of Frenzied Dealmaking

In the U.S., expenses soared across the industry in the final three months of the year, driven up by rising compensation costs. Most executives were optimistic, however, that rising interest rates would rekindle trading revenue this year and dealmaking would continue to soar. The five largest lenders generated a record $55 billion in revenue last year from putting together stock and bond offerings and advising on mergers, an increase of 40% from 2020.