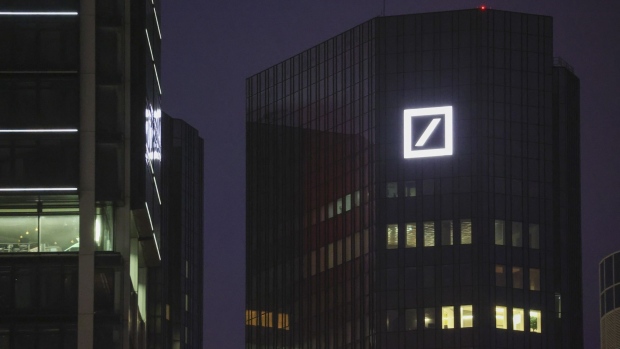 The Deutsche Bank AG headquarters in Frankfurt, Germany, on Wednesday, Dec. 23, 2020. Germany's coronavirus deaths rose by 986, the most since the start of the pandemic. Photographer: Alex Kraus/Bloomberg , Bloomberg

(Bloomberg) -- Deutsche Bank AG is acting as a broker for some investors who are keen to sell their holdings in Credit Suisse Group AG’s supply-chain funds that bought products from Greensill Capital, according to people familiar with the matter.

The German bank has contacted hedge funds and investment firms to gauge interest for a deal, the people said, declining to be identified because the information is private. It’s unclear how many investors are looking to sell and at what price.

Credit Suisse started liquidating $10 billion of funds earlier this month after insurance covering some of the debt packaged by Greensill lapsed. The funds held in cash --about one third of the total-- will be distributed to investors, but the bank is exploring options for the remaining assets, Credit Suisse said on March 3.

The funds have a large exposure to receivables of GFG Alliance, a private metal group owned by Sanjeev Gupta. GFG said in February it was at risk of insolvency if Greensill stopped funding its businesses.