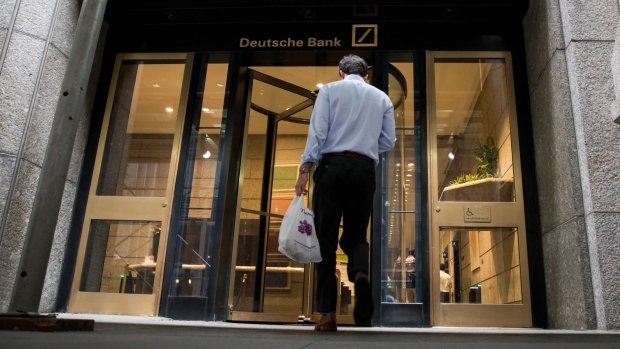 A person enters the Deutsche Bank AG headquarters at 60 Wall Street in New York, U.S., on Monday, July 8, 2019. A total of 18,000 jobs are due to be cut as Deutsche Bank exits the equities business in a 7.4 billion-euro ($8.3 billion) restructuring intended to turn around years of decline. , Photographer: Michael Nagle/Bloomberg

(Bloomberg) -- Deutsche Bank AG’s staff in New York City will be allowed to work from home at least until its new U.S. headquarters starts opening in July as Wall Street banks prepare for the return to office work.

About 90% of the German lender’s employees in the city currently work from home without major issues and the bank has decided it will be easier to ask people to start coming back to the office once the move starts taking place, a person familiar with the matter said. Deutsche Bank is currently relocating from Wall Street to Columbus Circle.

With the city promising a return to greater normality this summer, investment banks are starting to put in place plans to bring back workers. Goldman Sachs Group Inc. is planning to tell workers to prepare to return by mid-June, while JPMorgan Chase & Co., has said its staff will start coming back early July.

The German lender had previously told New York employees in the fall that they’d be able to work from home until mid-2021 pending the move. The bank has about 8,000 employees in the U.S., with New York and Florida accounting for a large chunk of that number.

Deutsche Bank doesn’t have similar plans for Germany, according to the person. A lower share of the population in the country has been vaccinated than in the U.S. and an end to the lockdown hasn’t been set yet.

An announcement for Deutsche Bank’s staff in London may come soon and is dependent on the evolving guidance from the country’s government, the person said.