Deutsche Bank Plans About Half Its 18,000 Job Cuts in Germany

Deutsche Bank AG plans to cut about half its planned 18,000 jobs in Germany as it relies on savings at the retail units to lower costs, according to people familiar with the matter.

The lender employed about 41,700 people in its home market at the end of last year, out of a total of 91,700. Outside Germany, London will also be hit especially hard, partly because of Brexit, while the U.S. may see a lower share of front-office cuts once the bank has exited its equities trading business, the people said, asking not to be identified because talks are ongoing.

Chief Executive Officer Christian Sewing in early July unveiled Deutsche Bank’s most radical restructuring in recent history, with job reductions a key piece of the plan. While Deutsche Bank has yet to detail the cuts to its retail bank -- now its largest division by revenue -- it’s increasingly clear they will be big, too. Frank Strauss, the head of the business, left when the restructuring was announced in the summer because he didn’t support the plans.

“We do not communicate details of the planned job cuts on a regional or divisional level,” the bank said by email. “We are communicating directly with our works council and our employees regarding their jobs and options available to them.”

The new head of the German retail unit, Manfred Knof, is currently scouring the business for cost savings. He’s considering turning the unit’s second headquarters in Bonn into an outpost, and he may dissolve the retail unit’s separate legal structure, people familiar with the matter have said. That could save Deutsche Bank hundreds of millions of euros in compensation and regulatory expense, other people said. 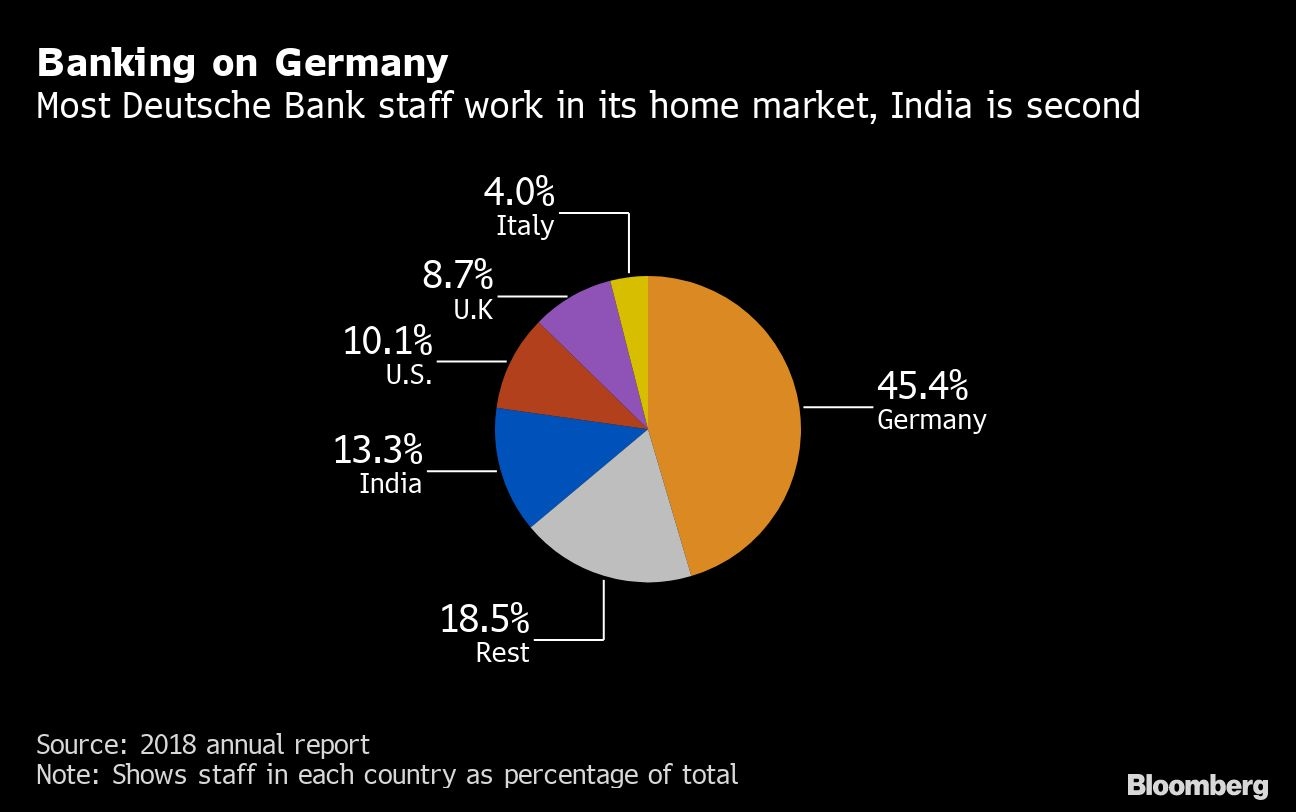 A decision will happen before the bank’s investor day in December, the people said. The change would need approval from financial regulators, who have so far indicated they take a positive view, one person said. They may not give their final verdict before next year, the person said.

Sewing has said that most of the planned cuts will happen by the end of 2021. While they will affect all regions where the bank operates, Germany will see “a fair share and a good share,” he said. The measures may take longer here than in other countries because of labor laws.

The German job cut figure includes staff being made redundant through the merger of Postbank with Deutsche Bank’s retail business, which was announced in 2017. In July, Sewing replaced Strauss with management board member Karl von Rohr. Strauss, who used to run the Postbank subsidiary when Deutsche Bank was still planning to list it on a stock exchange, was reluctant to cut costs as quickly as Sewing thought necessary, people familiar with the matter said. Strauss couldn’t be immediately reached for comment.

Deutsche Bank has said the retail bank will contribute 60 per cent of the 2.3 billion euros in cost savings it’s seeking to wring from its core businesses by the end of 2022. The division’s expenses are expected to fall by an average of six per cent per year -- far more than at any of the other divisions.

Deutsche Bank has indicated that most cuts will affect support roles and back office staff, rather than client-facing employees, as it seeks to automate workflows. It doesn’t break down where those jobs are located but it has large back-office hubs in Germany as well as in places as far apart as Jacksonville, Florida, the Philippines and India.

The decision to pull out of equities trading will also contribute toward the job reduction goal. Deutsche Bank recently sealed an agreement with BNP Paribas to transfer the part of the business that serves hedge funds, including about 1,000 staff who will move to the French bank, people familiar with the matter have said.