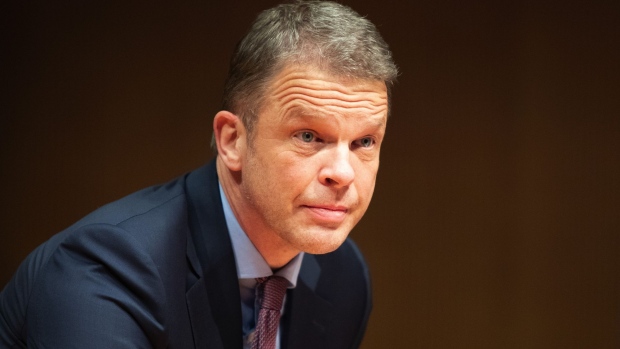 Christian Sewing, chief executive officer of Deutsche Bank AG, adjusts his earpiece at the Euro Finance summit in Frankfurt, Germany, on Monday, June 28, 2021. European Central Bank Executive Board member Isabel Schnabel pledged that she and her colleagues will do everything needed to sustain the economic recovery, and warned governments not to undermine that by tightening fiscal policy too soon. Photographer: Alex Kraus/Bloomberg , Bloomberg

(Bloomberg) -- Deutsche Bank AG Chief Executive Officer Christian Sewing apologized to the German Finance Ministry and the country’s top regulator for sharply-worded criticism by one of the firm’s research analysts, seeking to avoid tensions with two of its most important stakeholders ahead of elections this month.

Analyst Jan Schildbach -- in a note earlier this week on the reforms Germany needs as a financial center --  slammed the “qualifications” of regulators as well as a “failed” government-backed pension system. Sewing told German officials Deutsche Bank doesn’t share those views, said people familiar with the matter, who asked not to be identified.

The rare mea culpa highlights the sensitivities of Deutsche Bank’s sometimes strained relationship with regulators, as well as the urgency of being on good terms with Germany’s next government. Finance Minister Olaf Scholz of the left-leaning Social Democrats is the front-runner to take over from Angela Merkel. His ministry oversees BaFin and also has a role to play in shaping much of the regulation that the Deutsche Bank analyst slammed.

A spokeswoman for BaFin, the regulator, declined to comment as did Schildbach. A Deutsche Bank spokesman declined to comment on the firm’s contacts with the authorities, while the Finance Ministry didn’t immediately respond to an e-mailed request for comment.

German finance has fallen behind international peers over the past decade as stricter regulation under Merkel weighed on returns and the failure of aggressive growth plans saddled big banks with high legal bills. She championed regulation that prompted institutions to dial back risk and focus on the bread and butter business of lending, but she failed to create a functioning single market for banking services that would have made it easier for Europe’s investment banks to compete with Wall Street.

A summary of the report, sent by the bank before a link to the full note was deactivated, highlighted the following areas that are in need of reform:

Speaking at a banking conference earlier this month, Sewing said that he is “on the same page” as the Finance Ministry when it comes to issues such as completing Europe’s banking union. Scholz “knows exactly” that a nuanced view of the German economy is needed when implementing stricter capital requirements for banks, Sewing added.

Deutsche Bank and its research division publicly distanced themselves on Wednesday “from the inappropriate criticism in substance and tone of regulators and policymakers which were expressed.” The analyst expressed his own views, which aren’t shared by Deutsche Bank and weren’t authorized by the leadership of the research division, a spokesman said.

Other excerpts reported in local media contained the assertion that Germany “is the only industrialized country” to have seen so many scandals in the last 15 years in which the financial regulator cut “such a bad and sometimes dysfunctional picture” as BaFin.

The Finance Ministry replaced BaFin’s President Felix Hufeld as part of a wider overhaul after a series of scandals following the collapse of Wirecard AG. BaFin failed to uncover the fraud at the electronic payments company and appeared to protect Wirecard by banning bets against its stock while investigating journalists who reported on irregularities. BaFin has rejected allegations of bias, but has struggled to shed an image of working too slowly.

Hufeld was replaced by Mark Branson, who previously led the Swiss regulator Finma.