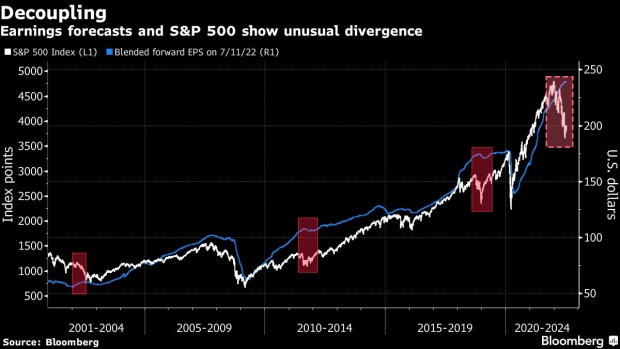 (Bloomberg) -- US stocks are unlikely to see a further selloff that is premised on weaker second-quarter earnings as that scenario has largely been factored in.

Instead, Deutsche Bank AG’s strategists say historical data suggest that the market has usually rallied during earnings season after a selloff. Additionally, there has already been a steady stream of downgrades for members of the S&P 500 Index, excluding energy, heading into the new season.

“We think it is unlikely the market sells off further merely on weaker earnings or guidance cuts as those are now widely expected,” strategists including Binky Chadha wrote in a note on Tuesday. “The market has usually (75%) rallied during earnings season, especially following a selloff and when investor positioning is very low going into the earnings season as is the case presently.”

Deutsche Bank joins Citigroup Inc. and Sanford C. Bernstein in arguing for relief in battered US equities saying that earnings related risks have been overplayed. That argument stands in contrast to the views of some market participants, including Morgan Stanley, who see US stock markets bracing for an earnings shock. The US bank expects the S&P 500 to hit the 3,000 level in the case of a recession.

The 12-month forward earnings estimate for the S&P 500 benchmark has risen 7% since the start of the year despite a sharp drop in the index in the first half, according to data compiled by Bloomberg. Attempts for any rebound have been thwarted by fears of a recession amid a hawkish Federal Reserve policy.

“Historically, there is almost no relationship between either the size of aggregate earnings beats or forward estimate cuts and the performance of the S&P 500 through earnings season,” Chadha and his colleagues wrote in the note.

What could drive a market selloff, though, are signs of corporate risk aversion, in particular, “large cost cutting measures or changes in capital spending plans,” they wrote. The strategists see S&P 500 earnings eking out a below-average beat in the low single digits for the second quarter.