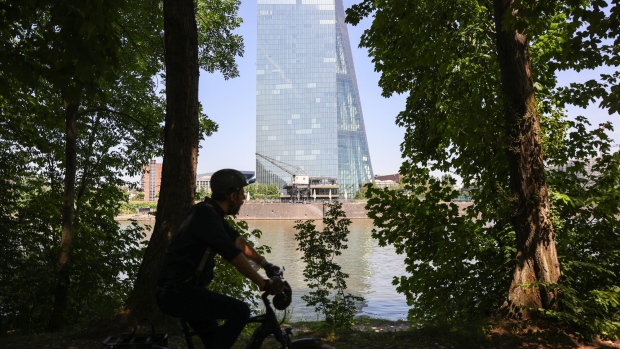 A cyclist rides past the European Central Bank (ECB) headquarters beside the River Main in Frankfurt, Germany, on Thursday, June 17, 2021. European Central Bank Chief Economist Philip Lane signaled that policy makers may not have all the data they need by September to start shifting policy away from the current ultra-loose stance. , Bloomberg

The European Central Bank will raise its deposit rate as early as December 2022, Deutsche Bank economists predict, arguing that inflation will be stickier than policy makers think.

While ECB officials reiterated as recently as this weekend that a rate hike is unlikely this year, analysts led by Mark Wall say there are signs of spillovers and strong labor-market momentum that could push up wages and prices.

“There is building evidence that inflation won’t recede as much as the ECB currently expects and that the liftoff criteria will be met already from the end of this year,” they wrote in a note to clients. That’s despite a sharp drop in the inflation rate this month and a slowdown over the coming months.

An increase in borrowing costs would mark the ECB’s first in over a decade. Investors are also bracing for a first move in December, after pushing back bets from October earlier on Monday.

Deutsche Bank’s analysts expect the deposit rate -- currently at a record low of -0.5% -- to rise by 25 basis points per quarter between December and September next year, followed by less frequent hikes. Their previous prediction was for quarterly increases of 10 basis points starting at the end of 2023.