Deutsche Bank AG’s debt traders held up better than most amid an industrywide slump. They just needed more help from other parts of the investment bank.

The German lender’s dealmaking and trading unit saw a drop in profit and revenue as fixed-income trading slipped 12 per cent. Advisory fees and a rally in equity trading were enough to provide revenue jumps at the investment banking units of UBS Group AG and Barclays Plc, but Deutsche Bank posted smaller gains in deal fees than U.S. rivals and has already gotten out of stock trading.

The results underscore urgency for Chief Executive Officer Christian Sewing to come up with alternative sources of growth, after relying on a boom in fixed income for much of his turnaround so far. But the lending businesses that were initially at the center of his strategy are still suffering from negative interest rates. Unexpected expenses, meanwhile, have forced the CEO to scrap the cost-reduction targets for this year and next, and prompted the bank to book a 583 million-euro transformation charge in the quarter.

While Deutsche Bank raised the outlook for the investment bank slightly, its shares fell as lower provisions for bad loans explained why third-quarter profit beat estimates. 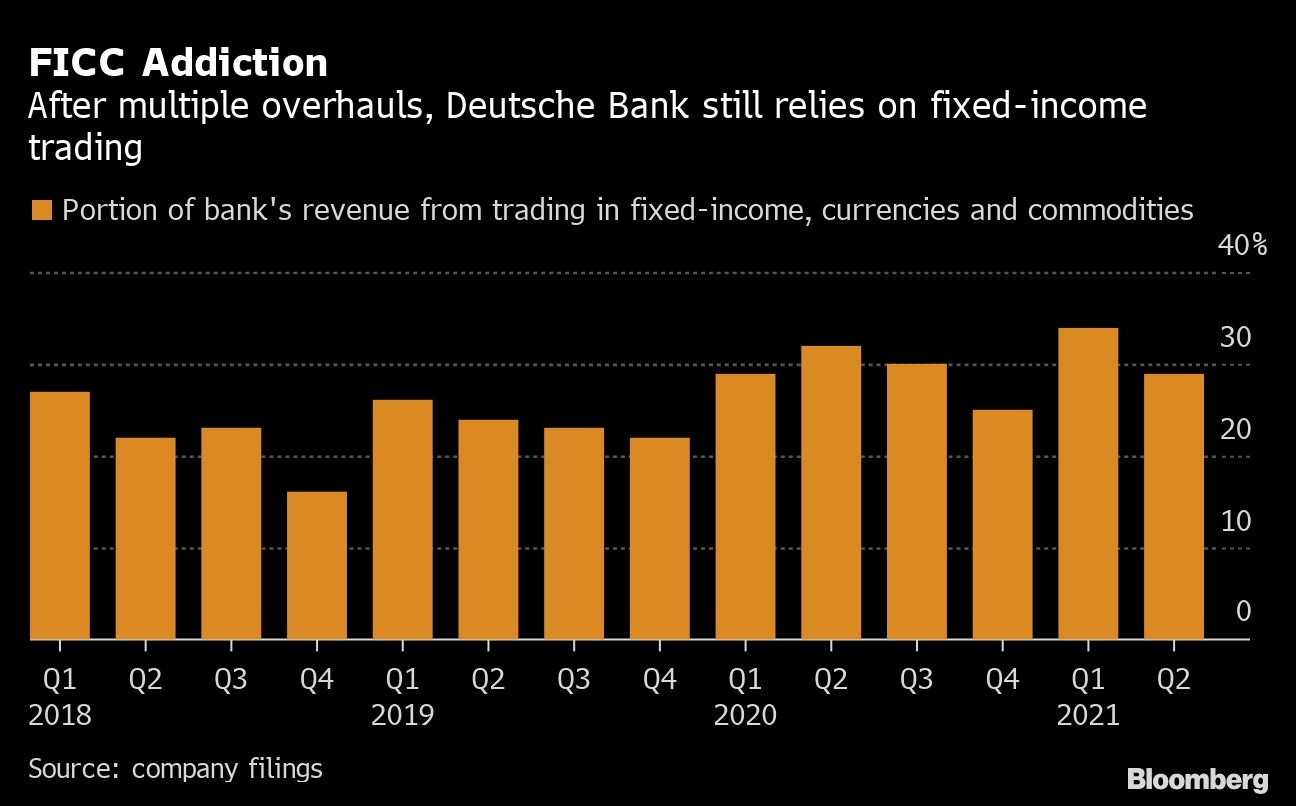 “Deutsche Bank has reported another solid quarter,” analysts at Citigroup Inc. led by Andrew Coombs wrote in a note, pointing to a beat on pretax profit. “However this is primarily the function of lower loan losses.”

Deutsche Bank fell 4.5 per cent at 10:07 a.m. in Frankfurt trading, leading European lenders lower. The stock is still up 27 per cent this year.

Spain’s Banco Santander SA also fell on Wednesday, declining 2.2 per cent, even after saying it would “significantly” beat its profit target for this year. Bank stocks had been gaining in the days before as earnings at rival lenders UBS and Barclays fueled optimism about the industry.

The drop in fixed-income trading at Deutsche Bank compares with an average decline of 13 per cent at the five biggest U.S. investment banks. Earnings from advising on deals and capital raisings rose 22 per cent, compared with more than 50 per cent at the U.S. banks. Sewing exited equities trading two years ago as part of his overhaul. Wall Street peers on average posted gains of 35 per cent in that business.

Deutsche Bank’s fixed-income traders had outpaced Wall Street in the four previous quarters, suggesting the lender has been winning back market share after almost half a decade of steady declines. While those results were boosted by one-off gains such as successful bets by the distressed debt team, the third-quarter results suggest it’s consolidating its position.

But the corporate-banking unit and the retail division both once again failed to grow as negative interest rates continued to weigh on the businesses that Sewing once put at the heart of his strategy. The CEO said in a memo to staff that “the foundation for future growth” had been laid in the corporate bank while also pointing to increasing profitability in the retail division.

In a presentation, Deutsche Bank said that revenue overall was “developing in line with or better than previous 2022 ambitions” and that it’s “positioning for meaningful capital returns to shareholders starting in 2022.” The lender set aside 641 million euros in the first three quarters of 2021 for dividends to be paid next year.

“Client engagement was high and increased as the quarter went on” in debt trading, Chief Financial Officer James von Moltke said in an interview on Bloomberg TV. “So we’re quite optimistic actually about our ability to carry some of that momentum forward.”