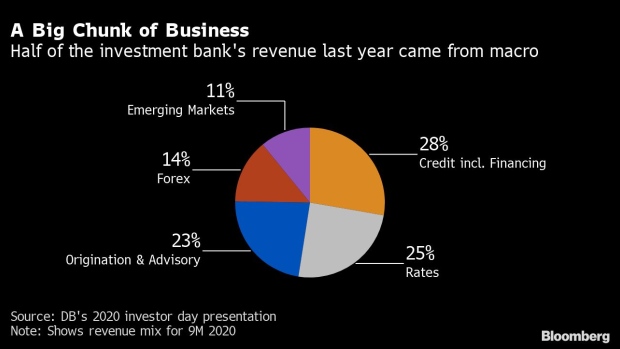 (Bloomberg) -- Deutsche Bank AG traders are facing almost unprecedented volatility in interest rates, currencies and emerging markets in the fourth quarter, even as other parts of the investment bank benefit from rising stock markets and a surge in dealmaking.

Fixed-income markets have been “a tale of two cities,” with credit trading and financing performing well along with stock markets, trading head Ram Nayak said in an interview. But debt securities more sensitive to global economic developments “have gone through the choppiest times we have seen.”

“We’ve managed the choppiness quite well,” he said via Zoom. “In credit and financing, we have kept the momentum going.”

Rates, currencies and emerging markets have been a key driver for the investment bank, contributing about half of the unit’s revenue in the first nine months of last year. A slowdown there would add to challenges for Deutsche Bank Chief Executive Officer Christian Sewing as he enters the final year of his turnaround plan, which has been carried largely by the trading and securities unit. The corporate lending business he initially prioritized, meanwhile, has struggled with negative interest rates.

Nayak’s comments are among the first indications of how major investment banks performed in the final months of the year. As inflation accelerates, threatening to end a three-decade hiatus, traders who for the most part haven’t lived through such a period are having to contend with unusual swings in everything from government bonds to currencies.

In the U.S., Treasury yields surged Wednesday after Federal Reserve Chair Jerome Powell suggested Tuesday that stubbornly high inflation warranted increasing the pace of policy tightening. That saw the market reverse course after benchmark 10-year yields fell to a two-month low this week on fears that the new omicron variant of the coronavirus could be resistant to existing vaccines. At the Bank of England, meanwhile, a widely anticipated increase in interest rates could be delayed by the emergence of omicron.

Still, for Deutsche Bank’s traders, Nayak gave a cautiously upbeat outlook on next year, saying his unit can “possibly do a bit better” than the 5% drop forecast by analysts for fixed-income trading across the industry.

“Our goal is not to give back any market share, and we’re confident we can,” he said. Nayak’s unit has been growing faster than the Wall Street average for much of 2021, suggesting his traders have regained market share that was lost in previous years while Deutsche Bank was going through a period of instability.

Speaking in the same interview, Mark Fedorcik, the head of the advisory business, struck a more positive tone after his unit made dozens of hires this year at the level of managing director or director, more than offsetting departures.

“We have the most momentum and the best team in three years,” he said. The business of advising on mergers and debt origination performed particularly well in the fourth quarter, he said, adding he expects that trend to continue into the first quarter of next year.

The investment bank led by Nayak and Fedorcik is the largest revenue contributor to Deutsche Bank and its performance has exceeded Sewing’s expectations when he unveiled his strategy a little over two years ago. Fedorcik said there’s no reason to change the lender’s previous full-year guidance that investment banking revenue will be at least as high as last year.

That performance also means that its staff can expect substantial payouts, Fedorcik indicated, without giving details. There is “upward pressure on salaries” across the industry, he said, especially for junior bankers and associates, as “demand for talent is the highest I’ve ever seen.”

“We had two very strong solid years and you want to keep that momentum going,” he said in response to a question about bonuses. “You need to compensate people commensurate with performance and market.”