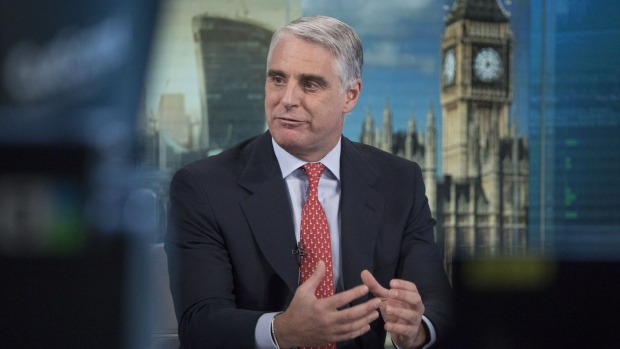 The headquarters of UniCredit SpA in Milan, Italy, on Sunday July 31, 2022. UniCredit top corporate and investment bankers are betting on surging demand for risk products in the most volatile market in a decade, and taking deal-making business from rivals to help meet ambitious revenue targets set down by Chief Executive Officer Andrea Orcel. Photographer: Francesca Volpi/Bloomberg , Bloomberg

Deutsche Bank AG is on track to reach the “top end” of its revenue guidance for the year, according to Chief Financial Officer James von Moltke, while UniCredit SpA Chief Executive Officer Andrea Orcel said Thursday that the bank will give a “substantial upgrade” to its targets alongside third-quarter results. Both executives were speaking at a Bank of America Corp. conference in London.

After a decade under a negative-interest-rate regime, European lenders are facing a complex environment where energy supply constraints and economic gloom are being offset -- for now -- by the response from central bankers to rapid price gains. Orcel, who leads a bank that operates in several countries across the region including Germany, said he can expect an extra billion euros in revenue for every 100 basis points in higher official borrowing costs.

“Our financial performance will be further boosted by the constructive rate environment, that was not part of our plan,” Orcel said, adding that the bank previously “took a very conservative set of macro assumptions.”

UniCredit shares surged as much as 7% in trading in Milan while Deutsche Bank rose almost 4%, both outperforming the broader Stoxx Europe 600 Banks Index which slipped.

Deutsche Bank, Germany’s largest lender, has guided for full-year revenue of between 26 billion euros and 27 billion euros ($26.6 billion). Earnings will likely come in at the top of that range on the back of a strong performance in fixed income trading so far this quarter and continued momentum in the private bank and corporate bank, von Moltke said. That’s helping balance weakness in origination and advisory services that are in line with the broader market, he said.

Von Moltke’s comments follow on warnings from Wall Street banks that revenue from deal-making and underwriting capital raises will plunge in the current quarter, with both Citigroup Inc. and JPMorgan Chase & Co. warning that fees in the division could plummet 50%. However the lenders also said that the volatility that’s been hindering deals has continued to boost trading, especially the macro businesses.

Deutsche Bank’s guidance is for net interest income in 2025 more than 2 billion euros higher than the 2021 level of 11.2 billion euros.

Both UniCredit and Deutsche Bank are undergoing turnaround plans, with the German lender nearing the end of a process that’s been aided by higher-than-expected gains from trading amid the market turmoil first in the pandemic and later Russia’s invasion of Ukraine. UniCredit is being slimmed-down and refocused by Orcel, who took over as CEO last year.

While Orcel has hailed the positive benefit of rate increases for now, he has also warned that they could end up choking the economy. Von Moltke tempered his upbeat 2022 outlook with a more pessimistic view on 2023, saying the current uncertainty makes it hard to predict how much credit provisions might rise and whether developments such as a potential slowdown in loan demand will hurt the business.

UniCredit has rolled out one of the most generous shareholder payouts in Europe worth at least 16 billion euros ($15.7 billion) through 2024. The bank is targeting a full-year adjusted profit target excluding Russia at 4 billion euros as it focuses on the top line and keeping costs down.

The bank is targeting a full-year revenue excluding Russia at above 16.7 billion euros as it focuses on keeping costs down.