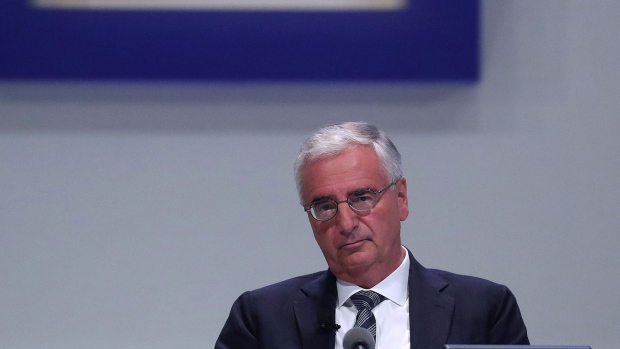 (Bloomberg) -- Deutsche Bank AG has been told by its top regulator not to wait too long in naming a successor to Chairman Paul Achleitner, who has overseen the lender during one of its most tumultuous periods.

The European Central Bank wants to ensure that Deutsche Bank identifies its next supervisory board chairman well in advance of Achleitner’s departure in May next year, according to people familiar with the matter who asked for anonymity to discuss the private communication.

An ECB spokeswoman declined to comment as did a Deutsche Bank spokesman. Reuters reported earlier that the ECB asked Deutsche Bank several times in recent months to name a successor as the end of Achleitner’s term nears.

The ECB has been urging lenders to seek its feedback on top nominations well before making appointments, in order to avoid embarrassment in case the regulator finds executives unsuitable for their roles. While Deutsche Bank has recently entered calmer waters and Achleitner vowed not to serve another term, Germany’s largest lender has a history of disorderly management changes, and some appointments have irked regulators.

Achleitner became chairman in 2012 and has outlasted three Chief Executive Officers as stricter regulation eroded returns and legal bills ate into Deutsche Bank’s financial reserves. In 2018, he replaced CEO John Cryan with Christian Sewing after a chaotic two weeks that exposed a power struggle atop the lender. Achleitner himself had come under heavy criticism from shareholders, before Sewing over the past two years restored a sense of calm at the lender.

Deutsche Bank plans to make an internal decision on Achleitner’s successor this year, possibly in the fall, two of the people said. The formal nomination is unlikely to be announced before the spring, when Deutsche Bank sends shareholders an invitation to their annual meeting, they said.

Achleitner has privately touted fellow board members Theodor Weimer, Frank Witter and Norbert Winkeljohann as potential candidates, according to people familiar with the matter. While Weimer is seen as front-runner, he has previously said he wants to wants to serve out his contract as CEO of Deutsche Boerse AG, which runs until the end of 2024.

Achleitner reiterated last month that he doesn’t intend to stand for re-election next year and that the search for a successor has started. The supervisory and management boards need “to set the course for the coming years and prepare an orderly transition,” he said.