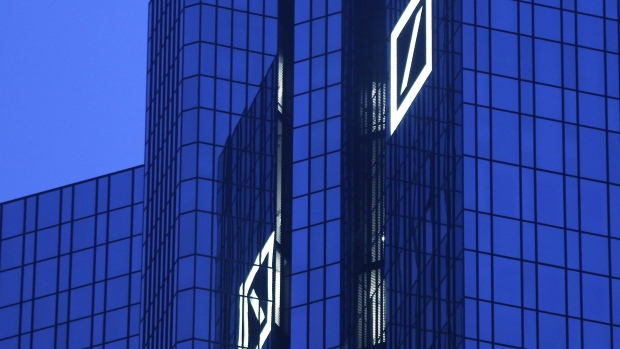 Deutsche Bank said on Monday it had no need for German government help with a US$14 billion demand by the United States to settle claims it missold mortgage-backed securities, as its shares hit a record low.

German magazine Focus reported at the weekend that Chancellor Angela Merkel had met Deutsche Bank Chief Executive John Cryan over the summer and had indicated he could expect no help from Berlin in resolving the bank's dispute with the U.S. Department of Justice.

Germany's biggest lender responded on Monday by saying it did not require assistance from Berlin and had not requested it.

"John Cryan at no point asked the German Chancellor for the government to intervene in the U.S. Justice Department's mortgages case," a Deutsche Bank spokesman said, adding that the bank would meet its challenges on its own.

The lender's litany of legal troubles, of which the US$14 billion DoJ claim is only the latest, have spurred worries it may need to raise capital to stanch the damage.

Those concerns have contributed to a 50 percent drop in its share price since the start of the year. But the bank spokesman said capital raising was not on the agenda.

"There is currently no question of a capital increase. We are meeting all regulatory requirements," the spokesman said.

In a separate television interview, the spokesman stressed what he said were Deutsche Bank's strong credit portfolio and liquidity, and low value-at-risk.

"The third quarter is almost over and I can tell you today we are fine and very comfortable here," he told CNBC.

German government spokesman Steffen Seibert on Monday said there were no grounds for speculating about the government assistance to Deutsche Bank mentioned in the magazine report.

The German government was aware that the DoJ had settled with other banks in the past and Berlin expected a "fair result" would also be achieved in Deutsche Bank's case, he said.

Seibert declined to comment on whether there had been any contact between Deutsche Bank and the German government. Merkel regularly holds talks with senior business figures, he said.

A person close to the matter told Reuters that Cryan and Merkel had met in July to discuss Brexit repercussions, but did not touch on potential help with U.S. legal proceedings.

Deutsche Bank said in mid-September it was fighting the DoJ's US$14 billion demand, but the size of the demand has put analysts and investors on edge about the outcome.

"John Cryan always said that a rights issue would only be triggered by a larger-than expected litigation charge and it appears increasingly likely that Deutsche Bank investors will be asked to post bail for Deutsche's past crimes," Mediobanca analysts said in a note to clients.