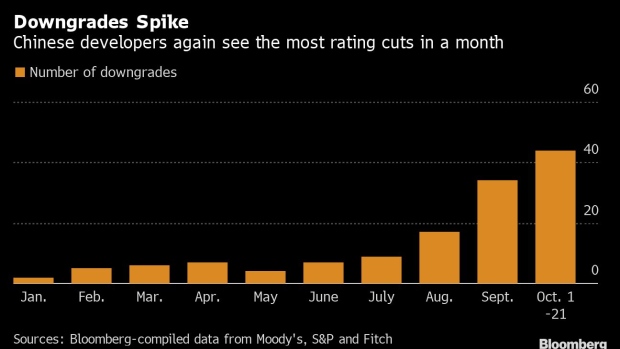 (Bloomberg) -- Further signs of stress emerged in China’s indebted real estate sector after Modern Land China Co. missed payment on a dollar bond, ahead of a test later this week for China Evergrande Group on an overdue coupon.

Modern Land didn’t repay either the principal or interest on a $250 million bond due Monday, according to a filing to the Singapore stock exchange Tuesday morning. The company is working with its legal counsel Sidley Austin and expects to engage independent financial advisers soon, the filing said.

China has clamped down on the indebted real estate sector, making it difficult for developers to refinance as they face falling home prices and sales. Multiple developers have defaulted this month, though Evergrande made a coupon payment last week before a grace period expired.

The focus now turns to the end of a grace period on another Evergrande dollar bond later this week. Still, the company’s creditors are bracing for an eventual debt restructuring that could rank among the largest ever in China.

Chinese developers with the worst balance sheets are getting crushed by a spike in borrowing costs, a phenomenon that’s intensifying as bills come due this month.

Credit-rating cuts for Chinese developers have accelerated further in October, hitting a record high for a second straight month. There were 44 reductions by Moody’s Investors Service, S&P Global Ratings and Fitch Ratings as of Oct. 21, after 34 downgrades for all of September, according to Bloomberg-compiled data.

People familiar with the matter said on Friday that Evergrande wired the $83.5 million coupon and bondholders would receive the funds before Saturday.

Evergrande creditors are still bracing for an eventual debt restructuring that could rank among the largest ever in China. News on the payment had boosted sentiment in China’s high-yield dollar bond market for a time Friday.

HSBC Holdings Plc said it’s “highly selective” in its exposure to the mainland Chinese real estate market, which has been the subject of investor concerns amid debt repayment struggles.

The Evergrande situation has been “well telegraphed” to the market, CFO Ewen Stevenson said in an interview on Bloomberg Television. He doesn’t expect HSBC to see “any material fallout” from it. Hong Kong’s real-estate market has been resilient through many cycles, and Stevenson doesn’t see any spillover effect.