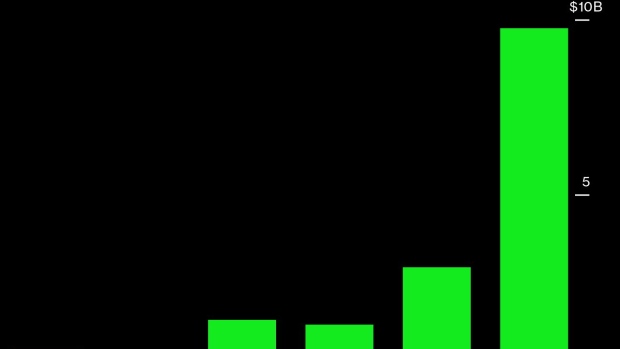 (Bloomberg) -- A dollar bond that creditors say is guaranteed by China Evergrande Group is reportedly back in focus, potentially adding pressure on the embattled developer as it seeks to cut liabilities.

Evergrande has yet to comply with a condition involving a Jumbo Fortune private dollar bond, which could enable holders to re-invoke the builder’s guarantee, according to a Debtwire report. Meanwhile the builder was told by regulators in Danzhou that it can’t repay debt with properties, Caixin reported. Shares of the company slid as much as 8.6%, the most in more than a month.

The broader debt crisis engulfing the Chinese real estate sector is threatening to upend developers that have borrowed billions in green debt to fund sustainable buildings. Chinese high-yield dollar bonds were down 2 cents on the dollar Friday, according to credit traders. A gauge of real estate stocks slipped 2%, extending losses this year to 29%.

Evergrande has yet to comply with a condition involving a Jumbo Fortune private dollar bond, which could enable holders to re-invoke the builder’s guarantee on Nov. 30, Debtwire reported Thursday citing two sources.

The developer was supposed to have helped holders of the 8.5% note to monitor the debt’s underlying project onshore, but has “blamed the local government for not providing required certificates to make that possible,” Debtwire wrote, citing one of the sources. It said bondholders intend to send documents to reinvoke Evergrande’s guarantee of the note if it doesn’t meet the alleged condition failure by Monday.

Kaisa Group Holdings Ltd.’s proposed dollar-bond exchange provides limited incentives for bondholders to agree, and even if successful “is at best kicking the can down the road,” said HSBC.

Recent such efforts by fellow Chinese developers Modern Land China Ltd. and Yango were “more generous” than what Kaisa is offering, credit analysts including Reks Ng wrote in a report dated Thursday.

Regulators in Danzhou city in China’s Hainan province tightened oversight of Evergrande’s arrangements to repay debt with properties on concerns over the risks of such transactions, Caixin reported, citing the local authorities.

Evergrande was told by housing authorities in Danzhou this week that transactions using assets in the Ocean Flower Island project to repay unrelated debts will be prohibited.

The debt crisis engulfing the Chinese real estate sector is threatening to upend developers that have borrowed billions in green debt to fund sustainable buildings.

Two prominent firms that are struggling to meet their debt obligations, Kaisa and Fujian Yango Group Co., now face “inevitable” default scenarios, according to S&P Global Ratings, which cut both issuers’ credit ratings deep into junk territory before withdrawing its assessment on both earlier this month. Together, the developers and their units sold at least $1.9 billion in ethical debt.

China’s economy continued to slow in November with car and homes sales dropping again as the housing market crisis dragged on.

That’s the outlook from Bloomberg’s aggregate index of eight early indicators for this month. While the overall number stayed unchanged, under the surface there was a further deterioration in some of the real-time economic data.

Strong export demand has helped to partly offset the property slump, and the latest shipment figures from South Korea -- a bellwether for global trade -- suggest another solid month for the sector. However, the pace of increase slowed and other high-frequency global trade data also suggest an easing in demand.

Fantasia Holdings Group Ltd. says a winding-up petition was filed against its major subsidiary Fantasia Investment Holdings Company Ltd on Nov. 24 in connection with an alleged outstanding loan of $149 million, according to a filing to the Hong Kong stock exchange.

“The company will seek legal advice to protect its legal rights and interests and take all necessary measures including maintaining a constructive dialogue with the petitioner to address the matter,” it said.