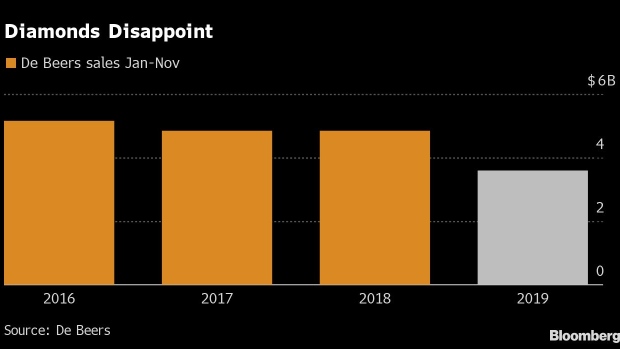 Anglo American Plc curbed its diamond-mining plans for the next two years after sales slumped in 2019 amid a wider industry crisis.

Anglo said its De Beers unit will mine 1 million carats less than previously expected in both 2020 and 2021. Still, production is set to rise from the 31 million carats dug up this year, according to an investor presentation on Tuesday.

The diamond industry is in crisis as De Beers’s buyers grow increasingly frustrated with the cost of rough stones as the price of polished gems slump. That’s led to wafer-thin margins and losses for some of the traders that buy stones from De Beers and Russian rival Alrosa PJSC. De Beers sales so far this year are down by more than $1.2 billion from the same period in 2018.

The company, which says it mines to meet demand, has responded by offering more flexibility to its customers, allowing them to reject some purchases. Last month, De Beers cut prices across the board by about 5%.

Anglo also lowered its production goals for coking coal over the next three years after selling a stake in one of its mines in Australia. The company said its Minas Rio iron ore mine in Brazil will produce 1 million tons less than previously forecast.