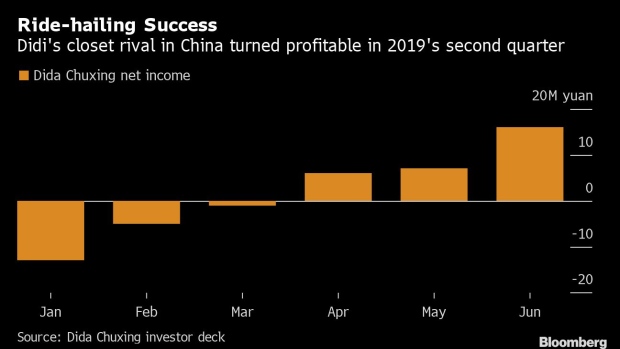 Automobiles and coaches come to a standstill during a traffic jam as haze covers the highway in Beijing, China, on Friday, July 29, 2016. As China's travel market takes off, all eyes should be on the country's roughly 400 million millennials, who will drive spending on airfare, hotels, theme parks, casinos and cruises. Photographer: Luke MacGregor/Bloomberg , Bloomberg

(Bloomberg) -- Chinese ride-hailing startup Dida Chuxing is seeking to raise as much as $300 million and is considering an initial public offering, escalating competition with larger rival Didi Chuxing, according to people familiar with the matter.

IDG Capital-backed Dida is raising between $250 million to $300 million in a pre-IPO round that it pitched to a wide range of investors, the people said, asking not to be named because the matter is private. Dida has mulled floating on exchanges in mainland China or Hong Kong, but prefers the latter, one person said. A Dida spokeswoman declined to comment.

Ride-hailing operators are grappling with dwindling investor sentiment after Uber Technologies Inc. went public last May only to see its shares tumble. Dida, which infuses social elements into its car and taxi-hailing operation, has been trying to raise capital since around the middle of last year, the people said. It’s unclear what valuation the Chinese company is targeting.

In May 2015, Dida received a $100 million funding from China Renaissance Capital Investment, according to Dida’s website. In March 2017, Chinese private equity fund Nio Capital led a new round in Dida. Hillhouse Capital, IDG, JD.com and Nio Capital participated in the company’s last funding round, according to a slide deck created in August but that’s been recently circulated to investors and viewed by Bloomberg News.

Dida says it became profitable last April, earning 29 million yuan ($4.2 million) in the second quarter of 2019, according to the investor presentation slides. The company generated 151 million yuan in revenue for 2018, and expects that to have jumped to 643 million yuan last year, the same presentation shows.

Beijing-based Dida is a distant second to Didi in China’s ride-hailing arena but its popularity grew after two female passengers were murdered while using the services of competitor Didi. Dida operates a network of 1.2 million taxi drivers and its daily orders has surpassed 3.65 million, according to the deck.

To contact the editors responsible for this story: Edwin Chan at echan273@bloomberg.net, Colum Murphy, Peter Elstrom