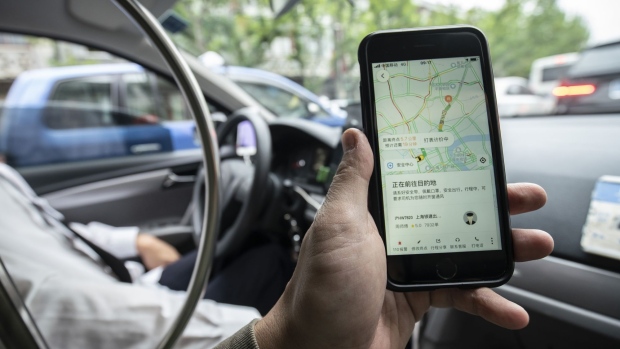 The Didi Chuxing Inc. ride-hailing app is displayed on a smartphone in an arranged photograph in Shanghai, China, on Friday, Sept. 18, 2020. Uber Technologies Inc. is seeking to sell part of its $6.3 billion stake in China's Didi Chuxing, as it begins to shed minority holdings to raise cash, according to people familiar with the matter. Photographer: Qilai Shen/Bloomberg , Bloomberg

(Bloomberg) -- The ride-hailing unit of Zhejiang Geely Holding Group Co., which raised almost $600 million earlier this month, is already in talks with investors for another funding round as it seeks to make ground on dominant market leader Didi Chuxing Inc.

The next round of fundraising may be completed in the first half of 2022, Cao Cao Mobility Chief Executive Officer Gong Xin said in an interview. That comes after the company raised 3.8 billion ($588 million) from state-owned funds including Suzhou Xiangcheng Financial Holding Group and Suzhou High-Speed Rail New City Group.

While Didi controls as much as 80% of China’s ride-hailing market, it’s position is vulnerable after falling foul of the government following its $4.4 billion U.S. listing in June. It’s platform was removed from app stores in July, it has been ordered to strengthen user data protections and address the use of unlicensed drivers, and faces penalties ranging from a multi-billion dollar fine to a forced delisting or being taken under state control.

Cao Cao, which says it is No. 2 in terms of daily trips, currently operates in 62 cities with a market share ranging from 15% to 30%. The number of trips doubled in September from the average during March and April, Gong said.

“The ride-hailing business has huge potential,” said Gong. “The development of the market requires financial support. In the future we will attract more investors to come on board, especially strategic investors.”

The firm may sell shares in an initial public offering in the next five years, but hasn’t decided on a location, Gong said.

Cao Cao plans to boost the number of daily trips tenfold to more than 10 million in that time, and is targeting expansion into South America, Southeast Asia and Europe from as early as next year, he said. The company may be able to break even in about two years, he added.

With the government also cracking down on how tech giants collect and use the vast amounts of user data they gather, Gong said the ride-hailing unit is making a concerted effort on ensuring data security and preventing the leakage of passengers’ privacy. “The data we collect is for the purpose of enhancing user experience and safeguarding both drivers and passengers.”

Geely founder Li Shufu is mapping out a vast empire, planning to turn the automaker into a full transport-service provider. Along with the ride-hailing business, Geely offers a 60-second battery-swap service to make EV driving more efficient, and is working on a flying taxi.

Geely, which has been developing cars specifically for Cao Cao’s fleet, will roll out a Maple S60 EV next month that is about 40% cheaper than rival models, Gong said. A vehicle planned for 2024 will remove the front passenger seat to allow more space in the back, with screens and even vending machines for commuters to use, he said.

Named after a Han dynasty general whose nickname has the same characters as Geely in Chinese, Cao Cao plans to expand into about 400 municipalities within five years, Gong said.