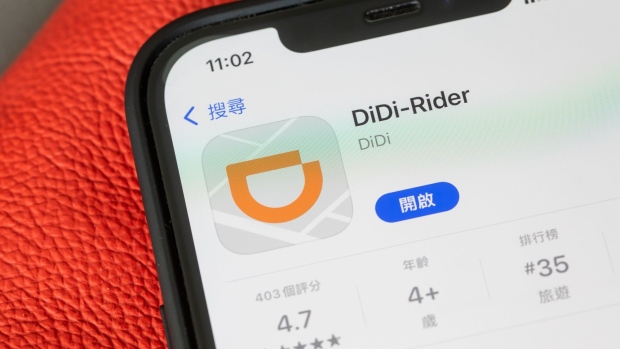 The Didi Global Inc. app for download on the Apple Inc. App Store on a smartphone arranged in Hong Kong, China, on Friday, Dec. 3, 2021. Didi has begun preparations to withdraw from U.S. stock exchanges and will start work on a Hong Kong share sale, a stunning reversal as it yields to demands from Chinese regulators that had opposed its American listing. Photographer: Paul Yeung/Bloomberg , Bloomberg

(Bloomberg) -- Chinese ridehailing giant Didi Global Inc. plans to reduce its overall headcount by as much as 20% as the troubled tech firm pushes ahead with plans to transfer its stock-market listing to Hong Kong, people with knowledge of the matter said.

Most of the company’s core businesses will be affected by the cuts, which are aimed at reducing expenses ahead of the Hong Kong listing, the people said, asking not to be identified as the information isn’t public. Ridehailing may see staff reductions of up to 15%, one of the people said, though drivers -- gig workers who aren’t officially included in the company’s headcount -- won’t be affected.

A Didi representative didn’t immediately comment on the job reductions, which were first reported by Chinese media Late Post. The plans have not yet been finalized and could still change. The company has already pared investments in once red-hot businesses like community grocery buying, some of the people said. Some units like Didi Finance, which is expanding outside China, and its autonomous driving business will be less impacted, another person said.

Didi, which pulled off its $4.4 billion U.S. initial public offering in June against Beijing’s wishes, has emerged as one of the biggest targets of a crackdown by Chinese authorities. Days after its listing, the company was placed under a cybersecurity probe and its services were taken off Chinese app stores. Months later, Didi announced it was planning to withdraw from the New York Stock Exchange and instead seek a new listing in Hong Kong, a move aimed at allaying concerns over the potential exposure of its data to foreign powers.

Shares of Didi have dropped nearly 70% from its offering price. The Beijing-based company revealed a $4.7 billion loss after revenues shrank in the September quarter following the regulatory assault against the tech firm.

Investors now await the final penalties stemming from the cybersecurity probe, as well as more details on how Didi, which is backed by SoftBank Group Corp. and Tencent Holdings Ltd., intends to transfer its shares to Hong Kong.

The market has priced in a possible penalty of 10 billion yuan ($1.6 billion) stemming from the government’s probe into Didi, Bernstein analysts led by Cherry Leung wrote in a report Monday that said “the regulatory storm is largely over.”

The company saw order share drop only 7 points to 74% in December, compared with the No. 2 player’s 16%, and Didi is expected to invest in marketing shortly after resuming new customer acquisition, the analysts added.

But in a sign that Beijing isn’t letting up on efforts to curb its tech companies, eight government departments including the ministries of transport and public security this week pledged to tighten regulations governing the car-hailing industry.

Rules for drivers and vehicles taking to the streets for the first time will be tightened, according to the statement published by the transport regulator.