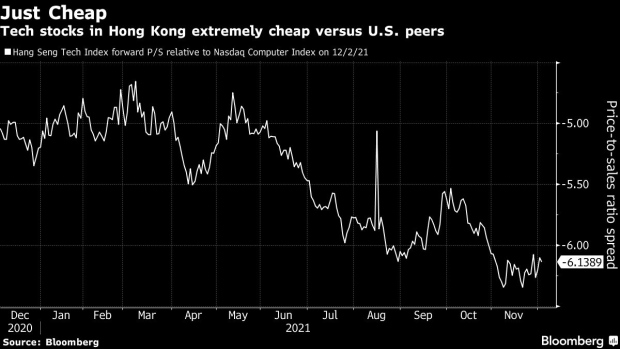 The Didi Global Inc. website on a laptop computer arranged in Hong Kong, China, on Friday, Dec. 3, 2021. Didi has begun preparations to withdraw from U.S. stock exchanges and will start work on a Hong Kong share sale, a stunning reversal as it yields to demands from Chinese regulators that had opposed its American listing. , Bloomberg

(Bloomberg) -- Chinese technology shares already sell at a discount to their U.S. peers, in part because of Beijing’s regulatory crackdowns. That gap may get wider if more companies follow Didi Global Inc.’s lead and abandon their New York stock listings.

A whopping $1.5 trillion has been wiped off China tech stocks since they peaked in February, and Didi’s decision to move its stock listing to Hong Kong could cast a further shadow over the likes of Alibaba Group Holding Ltd., Baidu Inc. and Bilibili Inc.

No other Chinese company has disclosed a plan to delist from the U.S., but investors are talking up the possibility: U.S. officials are pressing ahead with an effort to boot many of them off the market for not complying with disclosure rules, while Bloomberg News reported this week China wants to close a loophole that let firms list in the U.S.

“There is an argument that Chinese tech shares should be on a discount to U.S. peers,” said Edmund Shing, BNP Paribas Wealth’s chief investment officer, given the regulatory risk in China and the murky legal structure of the U.S. listings.

Didi shares whipsawed in premarket trading Friday. The stock fell as much as 4.5%, erasing an earlier rally of 15%. The stock had already plunged 44% from its initial public offering price in June through Thursday as traders priced in the crackdown against the company. The American depositary receipts of other U.S.-listed Chinese peers including Alibaba, Bilibili and Pinduodu Inc. declined Friday.

In Hong Kong, the Hang Seng tech benchmark fell 1.5% on Friday and now has lost almost a third of its value this year, while the tech-heavy Nasdaq 100 Index is up 24% and touched a fresh record high less than a month ago.

Some of them may not qualify for the Hong Kong market. More than 270 Chinese companies are listed in the U.S. and more than 150 of them don’t meet the criteria for a Hong Kong listing, according to a report last month from Bank of America Corp. And those that do will find that fewer American investors are willing or able to trade on international markets.

“The investor base of these Chinese stocks will have a dramatic change -- some American funds will have to exit forever,” Hao Hong, head of research at Bocom International Holdings Co Ltd., said by phone. “The selling pressure should last for a short term since it’s caused by regulation change, not by their earnings concern.”

Optimists say all the turmoil and the resulting steep discount could give a nice entry point for long-term investors. Hong says it’s a good opportunity to buy as he believes the tech sector has priced in most of the bad news.

“You know, people are not finding many reasons to buy them, but I would be looking at the ones sold off, who’ve already done their listing at home in Hong Kong,” Sam Le Cornu, Stonehorn Global Partners co-founder and CEO, said in an interview with Bloomberg TV.

DocuSign Inc. shares nosedived 32% in premarket trading after the e-signature company gave a weak revenue forecast. The lockdown darling’s drop is similar to the ones seen in Peloton Interactive Inc. and Zoom Video Communications Inc. after their results.