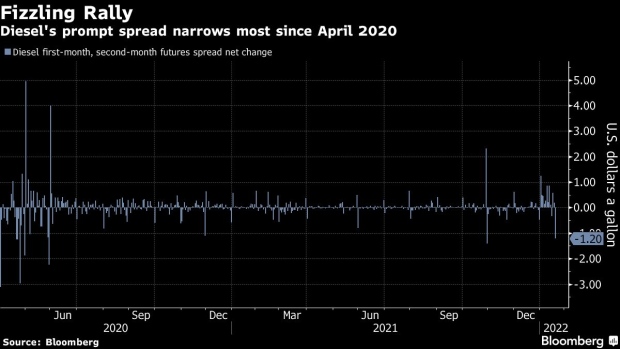 (Bloomberg) -- The premium on the nearest U.S. diesel contract collapsed on Thursday by the most since April 2020 as milder weather next month may reduce its demand for heating.

The so-called prompt spread between front-month and next-month diesel futures traded 1.16 cents lower at about 4.43 cents per gallon at 3:15 p.m. on the New York Mercantile Exchange. That’s just one day after it reached the most bullish structure since 2015.

The narrowing spread could signal a possible break in diesel’s rally, with temperatures expected to rise by early next month, reducing demand for the petroleum distillate that’s used both to fuel trucks and heat homes.

U.S. diesel retail prices hit $3.643 per gallon Thursday, approaching the highest level since October, 2014, according to auto club AAA. In the spot market, New York Harbor diesel’s premium over the futures contract fell to 0.5 cents, half of what it was a week earlier.