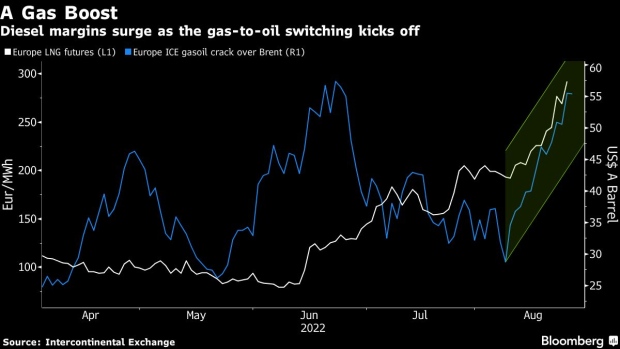 Consumers are seeking alternatives to gas after prices rallied to unprecedented levels as Russia’s invasion of Ukraine sparked an energy crisis in Europe. It’s also happening as global diesel stockpiles remain unusually low at a time inventories are typically expanding in preparation for a boost in consumption over winter.

The International Energy Agency this month raised its forecast for global oil demand growth on expectations for more fuel-switching from gas, which it said will be concentrated in Europe and the Middle East. US exports of crude and products rose to a record last week, with diesel leading the surge.

The rush for the fuel is a boon for refiners, but will also add more inflationary pressure to the global economy. The drought in Europe and a drop in exports of diesel from China are worsening the shortage, along with concern over Russian diesel flows into Europe where the energy crisis is most acute.

A flotilla of tankers -- including at least one supertanker -- is steaming from the Middle East and Asia to Europe, which is also grappling with disruptions caused by shallow water on the Rhine. Shell Plc cut production at Germany’s biggest refinery due to the low levels, while refiner OMV Germany GmbH recently reported a run on supplies of diesel and heating oil.

Europe is facing a diesel shortfall of around 1.5 million barrels a day and the deficit could expand as consumers replace natural gas with oil products, according to FGE. The industry consultant estimates profits in Europe from making middle distillates -- which include diesel -- are expected to rally to a record $70 a barrel during winter. The margin is currently around $55, according to ICE Futures Europe data.

Year-on-year demand for non-road gas oil and fuel oil will rise by 220,000 barrels a day in OECD Europe in the fourth and first quarters, according to the IEA. To put that in context, the region’s demand for diesel-type fuels was 6.26 million barrels a day last year.

Diesel profits have also rallied in Asia and the US, where nationwide distillate stockpiles are at the lowest for the time of year in more than two decades.

A fire at the largest US Midwest refinery on Thursday threatens to cut already low reserves just as farmers in the region are preparing to harvest. Such unplanned outages add to scheduled seasonal maintenance, indicating the US may not be able to sustain record-high fuel exports in the coming months, especially when cold weather descends in the Northeast.

The heating season could boost East Coast diesel use by 400,000 barrels per day, according to Linda Giesecke, an analyst from consultancy ESAI.

A reduction in Chinese diesel exports this year has exacerbated the slump in flows from Russia, according to Daphne Ho, a senior analyst at Wood Mackenzie Ltd. in Singapore. That’s been compounded by the loss of 3 million barrels a day of oil refining capacity over the past two years, she added.

Refinery maintenance across Asia during September and October could further tighten the market and drive profit margins higher, according to a note from Bloomberg Intelligence analysts Horace Chan and Henik Fung.

“This makes a diesel crunch particularly likely, based on critically-low inventory data at key trading hubs,” they said.