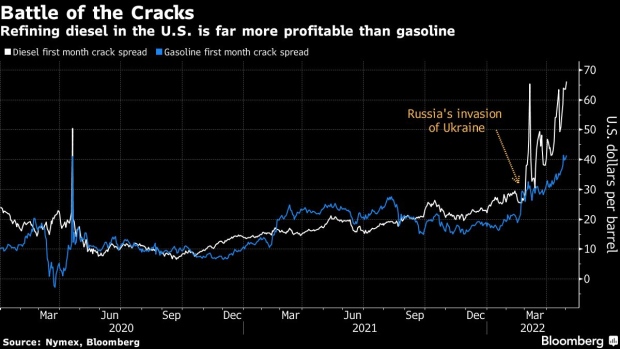 (Bloomberg) -- U.S. refiners are boasting strong quarterly returns as they hone in on near-record high diesel margins despite simmering concern that there won’t be enough gasoline to meet summer driving demand.

It’s a balancing act. Refiners will likely continue maximizing diesel output for domestic consumption and for export because of the eye-popping margins to make the industrial fuel. At the same time, emphasizing diesel comes at the cost of gasoline production and threatens to further elevate already-high domestic pump prices.

“Anybody who is not trying to figure out how to turn gasoline into jet fuel and distillate is not doing their job,” PBF Energy CEO Thomas Nimbley, said during the company’s first-quarter earnings call Thursday. Refiners will have to be nimble though because if gasoline supplies keep tightening and its margins shoot up, “you’ll start unmaking distillate and start making gasoline.”

It’s easy to see why refiners love diesel right now. Nymex diesel crack spreads touched above $67 a barrel Monday after while gasoline cracks were above $42. Gasoline cracks could quickly fatten if supplies of the motor fuel don’t increase significantly by the summer and refiners are slow to shift the production emphasis off of diesel.

For now, diesel inventories are the lowest in nearly 14 years. U.S. gasoline supplies are also slim, currently at the lowest level since December. Supply tightness won’t be easily resolved as the U.S. market has lost more than 1 million barrels a day of refining capacity the past few years with more shrinkage expected.

On top of that, feedstocks to run production units are scarce since the U.S. banned petroleum imports from Russia after it invaded Ukraine. PBF, which idled production in late 2020 at its New Jersey plant to stem losses amid Covid-related demand destruction, won’t restart many of those units any time soon because it can’t get enough feedstocks to run them at capacity.

During the pandemic, many refineries deferred essential maintenance and halted expansions, especially in the Middle East and Asia, meaning supply was already tight coming into this year, Exxon Mobil Corp. Chief Executive Officer Darren Woods said during a call with analysts Friday. The withdrawal of Russian products from the market then “compounded” the situation, along with fast-rising demand as the pandemic eased, he said.

The tight market is expected to persist into the summer driving season. While refiners traditionally time maintenance to end in time to build gasoline supply before June, PBF will shut production units in June at its Torrance, California, refinery for work. In the San Francisco Bay area, Chevron Corp.’s Richmond refinery plans a lengthy turnaround to run mid-June until at least the end of July. Any unplanned shutdowns that crop up will tax meager supplies even more.

Seasonal maintenance is particularly heavy and lengthy this year because so much work was postponed in 2020 and 2021 when Covid-19 travel restrictions and work-from-home policies decimated demand and profits. Phillips 66 won’t complete its seasonal maintenance until mid-May. The company said it may push some third- and fourth-quarter turnarounds to 2023.

“I think the focus is going to be on operating well and being in the market and able to take advantage of the margins that are available,” Jeff Dietert, Phillips 66 vice president of investor relations, said Friday during an earnings call.

Refiners are worried more about supply than having enough demand for their products, particularly gasoline. They are betting that after two years of curtailing summer trips because of the pandemic, U.S. drivers will be predisposed to ignore higher pump prices in planning summer vacations.

Refining margins (in $/bbl): gasoline cracks (as of April 29)