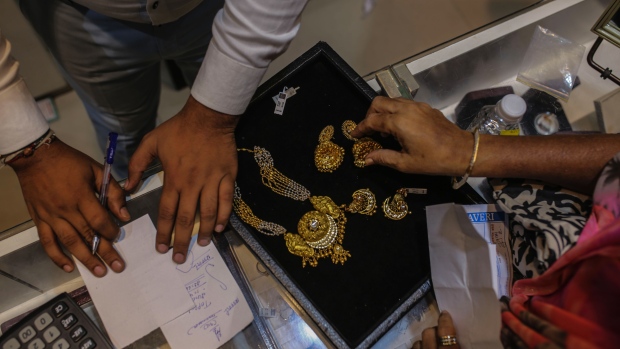 A customer inspects gold jewelry inside the Umedmal Tilokchand (U.T) Zaveri jewellery store during the festival of Dhanteras at the Zaveri Bazaar in Mumbai, India, on Friday, Nov. 13, 2020. India’s main holiday season -- culminating Saturday with Diwali, the festival of lights -- appears to be giving a much needed boost to demand, with online retail sales to business activity indicators signaling Asia’s third-largest economy is recovering. , Bloomberg

(Bloomberg) -- After giving Indians the option to buy gold online for as little as 10 rupees (12 cents), digital gold provider SafeGold is planning to let its customers lease their metal to credit-starved small jewelers.

The World Gold Council-backed firm wants jewelers to be able to borrow metal owned by some of its 14 million active users and sitting idle in vaults, founder Gaurav Mathur said in an interview. The gold would be returned later, with a fee.

“This will be the non-banking finance company equivalent of metal leasing and fits into government policy of reducing imports by utilizing idle gold and also benefiting smaller jewelers, who are starved of formal capital,” Mathur said.

Small, often family-run businesses account for about 65% of the world’s second biggest jewelry market, the WGC said in a report Wednesday. But one of their major challenges is securing credit from banks that increasingly prefer lending to regional or national chains.

Currently, only financial institutions nominated by the central bank can offer gold loans to jewelers, and the size of the market was about 65 tons in 2021, according to WGC.

SafeGold is trying to get clarity from regulators on its offering before it expands metal leasing, Mathur said. By December next year, the company aims to tie up with 700-800 jewelers, he said.

The leasing plan would be tied to metal bought by its customers since SafeGold launched a digital gold product in 2017. That allows Indians to buy bite-sized portions of gold online, with buyers able to take physical delivery if they have purchased at least one gram.

As a next step, SafeGold also plans to tap gold lying idle in Indian households and get consumers to lease their hoard to more jewelers. The potential in that segment is an estimated 8,000 tons of coins, bars and unused jewelry with individuals, according to Mathur.