China's economy surges in Q1 as consumer spending picks up

Even as China grows in economic and military power, perhaps nothing reveals Beijing’s weaknesses more than the U.S.’s control of the global financial system.

China has recently sought ways to counteract U.S. sanctions after the Trump administration targeted Chinese officials and companies over policies from the South China Sea to Xinjiang. Hong Kong’s leader can’t access a bank account and a top executive at Huawei Technologies Co. is detained in Canada. Even China’s state-run banks are complying with U.S. sanctions.

That’s one reason the Biden administration is starting to study whether China’s development of a digital currency will make it harder for the U.S. to enforce sanctions, Bloomberg reported earlier this month. The digital yuan, which could see a wider roll out at the 2022 Winter Olympics in Beijing, is also spurring the U.S. to consider creating a digital dollar.

But instead of challenging U.S. dollar dominance and neutralizing sanctions, the digital yuan appears potentially more geopolitically significant as leverage over multinational companies and governments that want access to China’s 1.4 billion consumers. Since China has the ability to monitor transactions involving the digital currency, it may be easier to retaliate against anyone who rebuffs Beijing on sensitive issues like Taiwan, Xinjiang and Hong Kong.

“If you think that the United States has a lot of power through our Treasury sanctions authorities, you ain’t seen nothing yet,” Matt Pottinger, former U.S. deputy national security adviser in the Trump administration, said last week at a hearing of the government-backed U.S.-China Economic and Security Review Commission. “That currency can be turned off like a light switch.”

So far China has mostly resisted hitting foreign firms in response to U.S. actions on companies like Huawei, holding off on releasing an “unreliable entity list” designed to punish anyone who damages national security. Any move to cut off access to the digital yuan would carry similarly high stakes, potentially prompting foreign investors to pack up and leave.

But Beijing has gone after companies like Hennes & Mauritz AB for statements on human-rights issues, even while government officials have been careful to avoid directly endorsing a boycott. In a Weibo post last month, the Communist Party Youth League declared: “Want to make money in China while spreading false rumors and boycotting Xinjiang cotton? Wishful thinking!”

Controlling access to China’s massive market remains the best way for Beijing to hit back at the U.S.: As long as Chinese companies still want access to the broader financial world dominated by the U.S. and its allies, Washington can effectively wield sanctions against nearly anyone who doesn’t operate exclusively in China’s orbit. And Beijing has little incentive to shun the dollar.

While President Xi Jinping has called for greater self-sufficiency in key technologies like advanced computer chips, a financial decoupling from the U.S. would only hurt China’s economy and potentially leave the Communist Party more exposed to destabilizing attacks. After Xi effectively ended Hong Kong’s autonomy last year with a sweeping national security law, the U.S. refrained from cutting off the territory’s ability to access U.S. dollars due to the potential devastation to the global financial system.

Widespread use of the digital yuan -- also known as the e-CNY -- could potentially give China’s central bank more data on financial transactions than the big tech giants, allowing the Communist Party to both strengthen its grip on power and fine-tune policies to bolster the economy. While that level of control may boost growth in the world’s second-biggest economy, it also risks spooking companies and governments already wary of China’s track record on intellectual property rights, economic coercion and rule of law.

China’s state-endorsed boycott of H&M shows “great commercial risk” for companies that use the digital yuan, Yaya Fanusie, adjunct senior fellow at the Center for a New American Security in Washington, told the U.S.-China Economic and Security Review Commission hearing. If foreign merchants had to use the e-CNY, he said in a separate email, the government could prohibit transactions with H&M wallets and the store could disappear from digital yuan apps.

“This is the other side of the coin -- Beijing not as a sanctions evader, but more empowered to enforce its own financial muscle,” said Fanusie, who has written extensively on how central bank digital assets may impact U.S. financial sanctions. “China’s digital currency is as much about data as it is about money,” he added. Foreign firms that use the digital yuan “might end up handing over to the Chinese government lots of real-time data that it could not access efficiently through conventional banking technology.”

China’s ability to see every transaction may make it difficult for foreign banks to use the digital yuan and still comply with confidentiality rules in their home countries, according to Emily Jin, a research assistant at the Center for a New American Security. But, she added, the currency might appeal to some regimes that prioritize control over privacy protection.

“They might find it easier to convince governments more authoritarian in their leaning that it helps monitor elicit activities or stop them quickly or stop them before they happen,” Jin said. “They aren’t going to market it to everyone.”

The digital yuan would serve as a back-up to Ant Group Co.’s Alipay and Tencent Holdings Ltd.’s WeChat Pay, which together make up 98 per cent of the mobile-payments market, according to Mu Changchun, director of the central bank’s Digital Currency Research Institute. Last month he said the electronic yuan has the “highest level of privacy protection” and the central bank wouldn’t directly know the identity of users, but the government could get that information from financial institutions in cases of suspected illegal activity.

Chinese policy makers have also repeatedly emphasized that the digital yuan isn’t meant to challenge the dollar, with People’s Bank of China Deputy Governor Li Bo saying last weekend the motivation for the e-CNY is primarily for domestic use. Former PBOC governor Zhou Xiaochuan downplayed the risks of the technology to the global financial system at the Boao Forum on Wednesday, saying the digital yuan will be used mainly for small retail payments.

The Chinese currency now makes up about 2 per cent of global foreign exchange reserves compared with nearly 60 per cent for the U.S. dollar, and most of Beijing’s trade and loans in Xi’s Belt-and-Road Initiative are disbursed in dollars.

Any serious challenge to the dollar’s position as the world’s reserve currency would also require significant policy changes from China, including lifting capital controls that help the Communist Party keep a lid on sudden outflows that could trigger a financial crisis. Even if the digital yuan could be transacted more cheaply outside of U.S.-controlled global payment systems, it’s unclear if anyone would use it.

“The dollar is not the dominant reserve currency because the Americans say it must be,” said Michael Pettis, finance professor at Peking University and senior fellow at the Carnegie-Tsinghua Center in Beijing. “The dollar is the dominant reserve currency because the Chinese, the Europeans, the Japanese, the South Koreans etc. say it must be. It’s the rest of the world that imposes that because they think its the safest place to park money.” 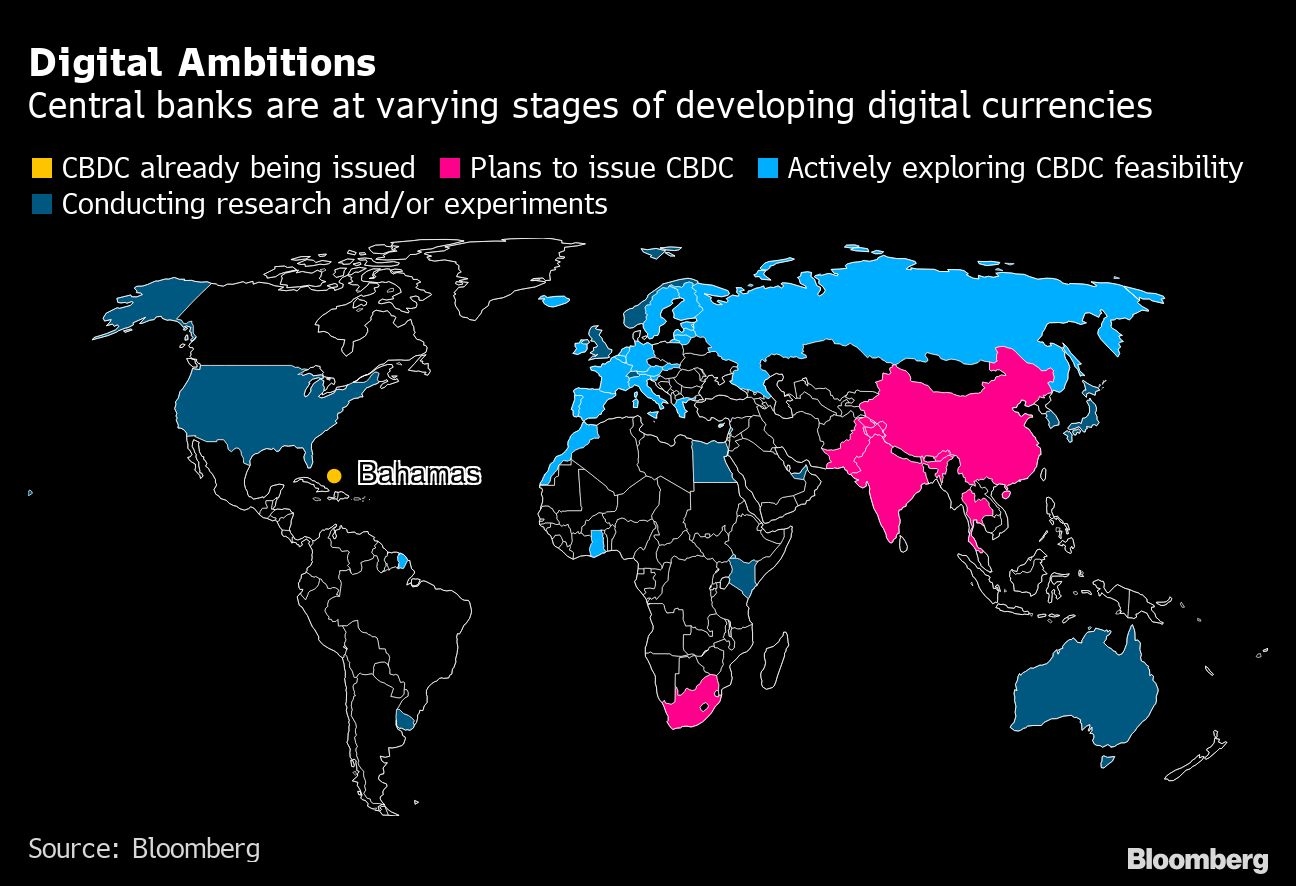 The U.S. still has an incentive to set standards for digital currencies. In a survey last year of 65 central banks representing 91 per cent of global economic output, the Bank of International Settlements found more than half were experimenting with digital currencies and 14 per cent were moving forward to pilots. The U.S. itself is taking a cautious approach: Federal Reserve Chair Jerome Powell said last month policy makers must understand the costs and benefits of a digital dollar, and wouldn’t rush the “very, very large, complex project.”

China began research on the digital yuan back in 2014, right after the price of Bitcoin surged from US$13.40 to more than US$1,000, raising the risk that digital currencies could impact Beijing’s control of monetary policy. It has begun technical testing with Hong Kong for cross-border payments, and is working with Thailand and the United Arab Emirates on real-time foreign exchange settlements. Authorities are also studying how the digital yuan can be combined with 5G networks and the internet of things.

This kind of research allows China a greater say in how other countries across the globe design digital currencies, particularly when it comes to questions of surveillance, privacy and anonymity, according to Josh Lipsky, director of the Atlantic Council’s GeoEconomics Center.

“China is really leading in this area and it should be a wake up call to the U.S. and to Europe,” Lipsky said. “There is a serious first mover advantage not because of what China will do, but what other countries are doing.