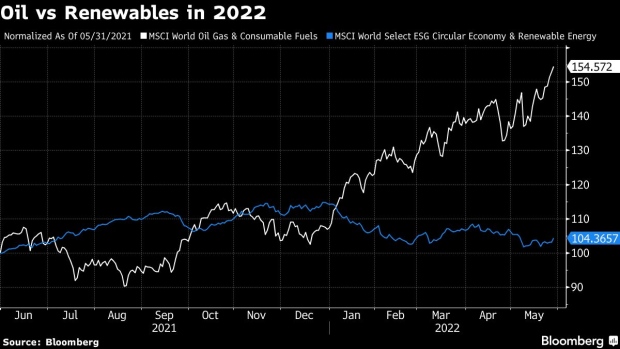 Posts to support racking systems for solar panels at the site of solar farm under construction on top of an old strip mine in Portage, Pennsylvania, U.S., on Monday, April 25, 2022. The fallout from a trade probe is rippling through the U.S. solar industry, delaying projects and threatening to slow the renewable energy transition. Photographer: Justin Merriman/Bloomberg , Bloomberg

(Bloomberg) -- As the ESG industry faces attacks from a growing chorus of detractors, insiders are also starting to air their doubts around aspects of the investing form.

James Whittington, head of responsible investment at Dimensional Fund Advisors with about $660 billion of assets under management, said the industry is struggling both in terms of real-world impact and returns.

Any “promise that you can outperform the market by your insight and evaluating ESG risks probably isn’t going to stack up,” he said in an interview. What’s more, Whittington said his team found “no compelling evidence” that investors targeting environmental, social and governance goals are altering companies’ cost of capital or achieving change through stewardship.

Whittington’s comments add to an increasingly incendiary debate that’s hitting ESG from all sides. HSBC Asset Management recently suspended its head of responsible investment after he questioned the sense of focusing on climate change. In the US, Republicans have identified ESG as a target in their culture wars, while Tesla Inc.’s Elon Musk has called ESG a “scam.”

A common theory among sustainable investors is that they will ultimately change the cost of capital for companies, rewarding outperformers, punishing laggards and creating a strong financial incentive for all to improve against ESG metrics.

While the theory makes sense, Whittington said he’s seen no hard evidence to back it up, especially in the secondary markets in which Dimensional operates. “Given the short time horizon we have, the short amount of data, there’s no compelling evidence yet that ESG investors are changing the cost of capital for companies.”

Read More: Hedge Funds Get Thumbs Down From MSCI on Disputed ESG Bets

A March study published by Goldman Sachs Group Inc. found that might be changing, with “the ongoing focus on de-carbonization” now measurably “driving a higher cost of capital in oil and gas developments.” That said, geopolitical developments this year have fanned considerable gains in oil and gas stocks, while renewables have languished.

Then there’s the question of how well ESG drives returns. Some view it as financially material, meaning a company that ignores environmental, social and governance factors will be less profitable in the longer run. Others, like Whittington, consider ESG a secondary consideration that can be added on to profit-driven strategies.

Whittington said Dimensional adds ESG factors -- predominantly environmental -- to a long-term, data-driven strategy. “The best way of managing risks, we think, is diversification and leveraging information in market prices,” he said. For Dimensional, ESG is about offering clients funds that align with their values, he said.

Read More: Which Clean-Energy Funds Stack Up as the Greenest: ESG Investing

A recent study by the European Securities and Markets Authority spanning early 2019 to late 2021 found that ESG funds generally perform better than conventional products. But ESG equity funds have had a bad start to 2022. In Europe, they’ve lost 14% on average, which is almost double the decline in the Stoxx Europe 600 Price Index, according to Bloomberg data.

Last year, global CO2 levels rebounded to their “highest level in history,” the International Energy Agency said in March. Meanwhile, the ESG industry has surpassed $40 trillion in value, according to Bloomberg Intelligence.

Researchers at the European Central Bank recently found that the link between fighting climate change and ESG investing remains “unclear.” And last week, the US Securities and Exchange Commission proposed new restrictions to crack down on greenwashing.

One of the problems with ESG, according to Whittington, is that it’s too focused on what’s going wrong, particularly in emerging markets.

“The growth of economies in emerging markets, just by making people more wealthy, has the potential to do a lot of good in the world,” he said. “Emerging market companies are growing the pie and having this type of positive impact that people want to see.”