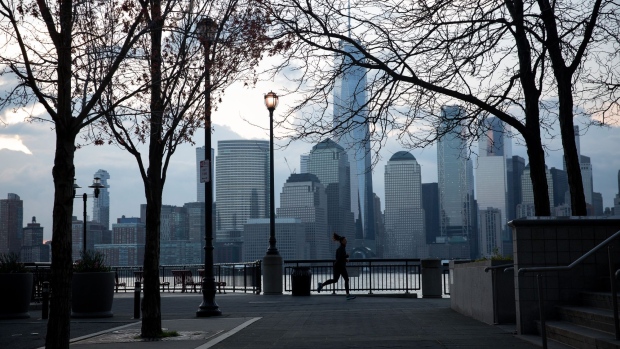 A jogger passes in front of buildings on the Lower Manhattan skyline along the waterfront in Jersey City, New Jersey, U.S., on Tuesday, April 21, 2020. Treasury futures ended Tuesday mixed, with front-end yields slightly cheaper on the day and rest of the curve richer, yet off session lows reached during U.S. morning. Photographer: Michael Nagle/Bloomberg , Bloomberg

Some of New York’s largest employers say they plan to hire 100,000 “traditionally underserved” residents of the area within the next decade.

The pledge, made by the chief executive officers of 27 companies including JPMorgan Chase & Co., Citigroup Inc. and Amazon.com Inc., is part of a new initiative called the New York Jobs CEO Council, according to a statement Monday. Combined, the firms employ more than 3.6 million people, figures compiled by Bloomberg show.

The CEOs plan to use their collective resources, money and scale to create “pathways to stable careers for New Yorkers in low-income and diverse communities,” many of which have been disproportionately affected by the coronavirus health and economic crisis, according to the statement.

People in lower-income, Black and Hispanic communities were more likely to be adversely affected by the pandemic. Many work in lower-paid, service jobs, which were most impacted by the shutdown, and had fewer resources and less savings to cushion the blow. Those still working were less likely to be able to do so from home, meaning Black, Hispanic and low-income Americans have been at an increased risk of exposure to the virus, according to a Bloomberg analysis.

The CEO Council said it plans to work with local schools and nonprofits to help provide access to education and training for “in-demand” jobs to “vulnerable communities.” The pledge includes plans to provide apprenticeships and job opportunities for 25,000 students from the City University of New York by 2030.

Some of the group’s members, including JPMorgan CEO Jamie Dimon and BlackRock Inc.’s Larry Fink, have been encouraging fellow CEOs to take on a larger responsibility for tackling societal problems. In May, Dimon said he hoped policy makers would use COVID-19 as a catalyst to rebuild a more-inclusive economy.

“Many New Yorkers are stuck in low-paying jobs that could be lost in the future or are struggling to navigate the labor market as the COVID-19 crisis has further exacerbated the economic inequities in the city,” Dimon said in Monday’s statement. “We are using our collective power to prepare the city’s workforce with the skills of the future and helping New Yorkers who have been left behind get a foot in the door.”

New York City, hobbled by what was once the biggest and deadliest COVID-19 outbreak in the country, is taking its first steps in the long slog back to normalcy after months in an economically devastating lockdown. New York Governor Andrew Cuomo has estimated that the state will see a $30 billion revenue hit over the next two years as a result of the public-health crisis. The jobless rate in the state is at 15.7 per cent, and in New York City it’s 20.4 per cent.

--With assistance from Payne Lubbers.