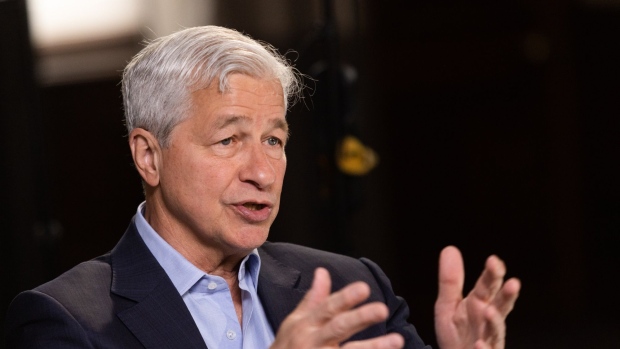 The biggest U.S. bank handed shareholders a hoard of information on business goals and investment strategy at its first investor day in more than two years on Monday. Shareholders, who’d been clamoring for more detail on spending plans unveiled in January, appeared to cheer the details -- sending shares to their biggest jump since November 2020.

Executives including Chief Financial Officer Jeremy Barnum and tech chief Lori Beer also gathered at the firm’s headquarters in New York to walk through the bank’s wide-ranging efforts to boost returns. The stakes for the meeting -- which offered presentations from all major business lines -- were high, following a stinging rejection of Dimon’s pay last week, and with JPMorgan’s shares down more than those of peers for the year.

“Twenty years ago, we didn’t have to deal with all the shadow banks, all the fintech and the big tech. We do now, that’s a reality,” Dimon said. “We have to innovate at speed and at pace like they do. And of course our bank competitors are very strong now too.”

The bank’s shares had surged 6.2% on Monday as the investor day continued into mid afternoon. They dipped slightly on Tuesday morning in New York.

JPMorgan’s slew of updates found favor with analysts, who cited the level of detail, the robust credit outlook and the prospect that higher interest rates would bolster profits. Susan Katzke of Credit Suisse Group AG raised earnings estimates, reflecting “both the operating environment and JPMorgan’s ability to capitalize on market opportunities.”

For Ken Usdin of Jefferies Financial Group Inc., “JPM will be very well-placed vs. many other banks that do not have the earnings power to support the same spending levels” in a few years’ time, he wrote.

In one example of its spending plans, consumer-banking co-heads Marianne Lake and Jennifer Piepszak broke down the incremental $3.3 billion of spending from 2019 through this year to grow the franchise. Both a $1.1 billion investment in the branch network and $400 million on wealth-management adviser hiring are projected to have a four-year break-even, while $2.2 billion in marketing expenses carry an expected return of two to three times that amount.

JPMorgan has been on a buying spree, with 2021 its most active year for acquisitions and strategic investments since at least the financial crisis. Many of those deals were cited Monday as executives walked through their growth plans. In the consumer and community bank, cxLoyalty and The Infatuation are helping the firm grow as a travel provider. As for asset and wealth management, acquisitions including 55ip and OpenInvest are helping build a personalized investment engine.

Dimon referenced a comment he made in 2020 instructing competitor investment banks to call his firm with any acquisition ideas. JPMorgan’s purchase of Global Shares, announced in March, was a result of that ask, and asset- and wealth-management head Mary Erdoes personally brought a check over to Lazard Ltd. after that firm pitched the idea, Dimon said.

President Daniel Pinto, who walked onto the stage to Taylor Swift’s “Welcome To New York” after moving to the Big Apple this year, delved into the corporate and investment bank with deputies Marc Badrichani, Troy Rohrbaugh and Takis Georgakopoulos. The firm sees a $5 billion revenue opportunity in payments, boosted by acquisitions.

Pinto also said JPMorgan’s investment-banking fees will probably be down 45% in the current quarter from record results a year ago, while trading in the period could rise 15% to 20%. He echoed comments he’s previously made that the total industrywide trading wallet has probably stabilized and will grow from here.

The firm lifted its net interest income guidance excluding the markets business to more than $56 billion for 2022, a 26% increase from last year, on expectations for higher rates and loan growth. It maintained its expense outlook of $77 billion excluding legal costs, an 8.6% hike from 2021.

On the economy, Dimon echoed comments from his annual shareholder letter last month that the US economy remains strong but there are “big storm clouds” on the horizon. A recession is possible but not set in stone, he said.

Read more: Dimon Says ‘Storm Clouds’ Over the US Economy May Dissipate