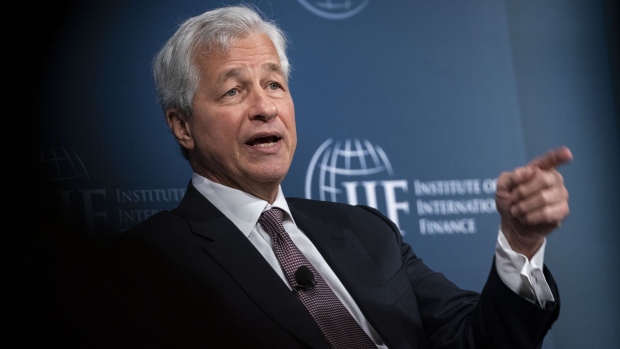 Warren “uses some pretty harsh words,” Dimon said Tuesday in an interview with CNBC. “Some would say vilifies successful people.”

“I don’t like vilifying anybody,” he said on CNBC. “We should applaud successful people.”

Warren, who is in second place behind Joe Biden in many polls of the Democratic presidential race, has unveiled a series of sweeping proposals to remake the U.S. economy, including her $21 trillion Medicare for All plan, which would create a government-run health care system that abolishes private insurance. The policies would be funded through steep tax increases on the wealthy and corporations.

Warren fired back at Dimon in a tweet. She said the economy “is working great for the wealthy and well-connected” like Dimon, and he “doesn’t want that to change.”

She said the fact that Dimon and others have “reacted so strongly —so angrily! — to being asked to chip in more tells you all you need to know.”

In another tweet, Warren said billionaires are successful because of public works, like education and roads, that all taxpayers underwrite. “It’s only fair,” she wrote, that Dimon “and his billionaire friends chip in to make sure everyone has a chance to succeed.”

Warren clashed with Leon Cooperman in October after the investor told Politico that while he believes in progressive taxation, he has fundamental disagreements with her approach. Warren tweeted on Oct. 23 that Cooperman should “pitch in a bit more” so that others have a chance at the American dream.

Cooperman responded Oct. 31 with an open letter to Warren in which he detailed his philanthropic efforts while raising objections to her proposed wealth tax, her main means of raising money for the ambitious spending programs she supports.