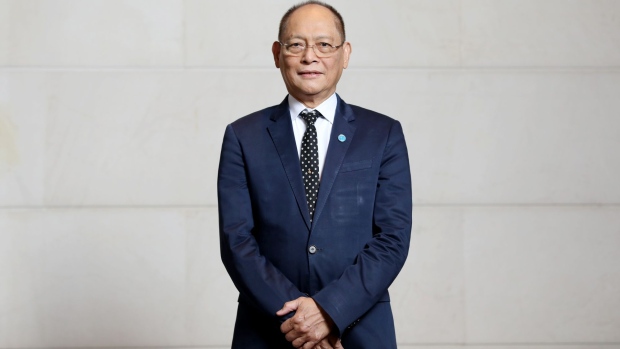 Benjamin Diokno, governor of the Bangko Sentral ng Pilipinas (BSP), poses for a photograph following a Bloomberg Television interview during the Milken Institute Asia Summit in Singapore, on Friday, Sept. 20, 2019. The Philippine central bank could deliver its third rate cut of the year next week as Governor Diokno expects inflation to ease to a three-year low this month. , Bloomberg

“We will focus on tax administration first and foremost” in the early part of the six-year plan, Benjamin Diokno said in an interview with Bloomberg TV’s Haslinda Amin and Rishaad Salamat on Wednesday. “We need a lot of money to continue our growth momentum” and will focus on public-private partnerships to move forward already planned infrastructure projects.

Diokno, who this week steps down as central bank governor to become the nation’s finance chief, will be tasked with finding funds for President-elect Ferdinand Marcos Jr.’s programs to support the economy’s expansion by at least 6% and curb inflation. It’s a big ask, after the pandemic pushed the nation’s debt-to-GDP ratio past the 60% level that market watchers typically consider as acceptable.

Many Asian economies are narrowing their fiscal support against rising prices to ease the strain on their pandemic-battered budgets. In the Philippines, incoming officials have preferred targeted support programs over wide-scale subsidies and excise tax suspensions.

Diokno, who has said he will continue to sit on the central bank’s board, also contends with rising borrowing costs as the monetary authority’s rate tightening gains pace. His successor, Felipe Medalla, has signaled a follow-through rate hike in August.

The Philippines’ economy in the second quarter is expected to have outpaced the 8.3% pace of the first quarter, Diokno said Wednesday, adding that he sees a long-term growth trajectory of 6%, which may “easily” get the debt-to-GDP ratio back to around 60% in two to three years.