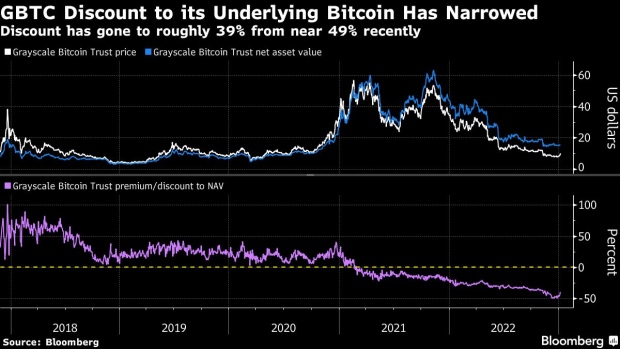 (Bloomberg) -- What once looked like an insurmountable discount plaguing the world’s biggest Bitcoin fund is starting to shrink as some speculators see an end in sight for Barry Silbert’s woes.

The $10.9 billion Grayscale Bitcoin Trust (ticker GBTC) surged nearly 12% on Monday, outpacing a 1.3% rise in the cryptocurrency itself. That narrowed the fund’s discount to its underlying Bitcoin holdings to roughly 39%, versus a nadir of 49% reached in mid-December.

The reversal amounts to a wager that pain at Grayscale’s sister company, crypto lender Genesis, might force the hand of its parent company, Silbert’s Digital Currency Group, to find a solution that ends up eliminating the GBTC discount. Grayscale, which generates hundreds of millions of dollars in annual fees from its suite of crypto trusts, has vaulted to become the crown jewel in the DCG empire after Genesis halted withdrawals in November and attempts to avert bankruptcy.

However, as tensions boil over with Genesis and Grayscale itself comes under fire — hedge fund Fir Tree filed a lawsuit against the asset manager related to GBTC’s discount, while Valkyrie launched an activist campaign to unseat Grayscale — traders are betting that some sort of conclusion will take shape.

“There’s a lot of issues with DCG and Genesis that may push them to try and unlock GBTC’s underlying value. There are also a lot of moves from outsiders like Fir Tree, Valkyrie and others to try and take over or force redeems for some, if not all, of the trust. It could also simply be buying from big fish to get shares in order to aid in the voting process to change the sponsor of GBTC and open redemptions,” Bloomberg Intelligence analyst James Seyffart said. “All of this just seems to be increasing the likelihood that something will happen in 2023 to at least alleviate some of the discount.”

BlockTower Capital, which manages more than $500 million, is among those buyers. Ari Paul, co-founder and CIO at the firm, says it’s deployed more than $10 million on GBTC recently. He says there are a handful of ways the discount could narrow, including the trust converting to an ETF, the Securities and Exchange Commission forcing partial or whole redemptions, Grayscale voluntarily dissolving the trust, among other reasons.

“This thing is trading so thinly, so illiquidly,” Paul said in a phone interview. “It could be that $100 million of buying itself could close most of the spread.”

Grayscale’s parent DCG is dealing with a number of blows. Gemini crypto exchange co-founder Cameron Winklevoss on Tuesday called for the board of Digital Currency Group to remove Silbert as chief executive officer as some 340,000 Gemini users are unable to access about $900 million in funds after Genesis stopped reimbursements in November.

Creditors including Gemini have been working behind the scenes to find a solution for nearly two months. On Jan. 2, Winklevoss issued his first open letter to Silbert on Twitter, accusing him of “bad faith stall tactics” and asking him to commit to a resolution by Jan. 8.

A DCG spokesperson said that “this is another desperate and unconstructive publicity stunt from Cameron Winklevoss to deflect blame from himself and Gemini, who are solely responsible for operating Gemini Earn and marketing the program to its customers. We are preserving all legal remedies in response to these malicious, false, and defamatory attacks,” adding that DCG will continue to engage in productive dialogue with Genesis and its creditors.

Stephane Ouellette, chief executive of FRNT Financial Inc, an institutional crypto platform, says some clients have been buying GBTC — though the trade is by no means a slam dunk.

“There’s probably two major factors: one, traders pricing in an increased likelihood of an outcome which involves other Silbert-related assets, and two, a slight reversal of some bearish crypto trades,” Ouellette said. “We have seen some clients take some ‘punts’ at the spread. The trade has been a complete widow-maker so there’s definitely some apprehension about jumping back in, in a big way.”

GBTC traded flat on Tuesday. It had slumped 76% last year, while Bitcoin dropped 64%.

--With assistance from Olga Kharif.