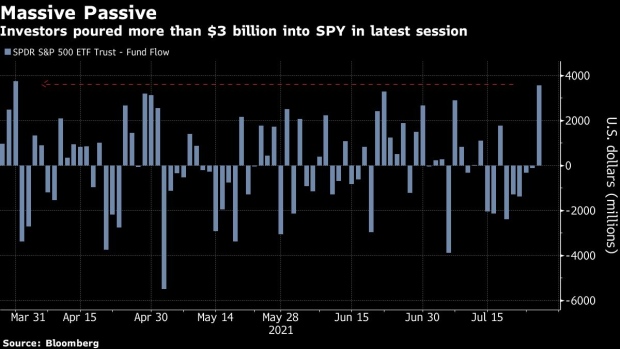 Days after backstopping U.S. stocks with record equity purchases, retail investors plowed almost $1.7 billion into the market on Tuesday, according to Vanda Research.

It looks like the Robinhood-powered cohort sunk their millions into exchange-traded funds, including technology stocks.

Chinese stocks including those listed abroad have been in turmoil as the Asian nation attempts to implement far-reaching reforms in several sectors including education and technology. Concern over the regulatory crackdown helped contribute to a downbeat day for U.S. equities on Tuesday, with the S&P 500 finishing 0.5% lower.

“Chinese ADRs are the latest example of how retail behavior has changed over the past four months,” Onatibia and Pierantoni wrote. “From driving triple digit returns in high multiple stocks, they have turned into dip buyers in underperforming ones.”

There have been only a few cases this year when the retail crowd has moved in the same direction as equity prices, the pair note: Meme stocks and space shares like Virgin Galactic Holdings Inc. Using that insight to predict potential retail-driven melt-ups, Vanda says cryptocurrencies “could enjoy a decent run,” in particular Bitcoin.

“The rebound in Bitcoin was most likely driven by a short squeeze,” they said. “We still haven’t seen a major increase in long positions but there are enough hints to suggest that retail investors are starting to pile in.”