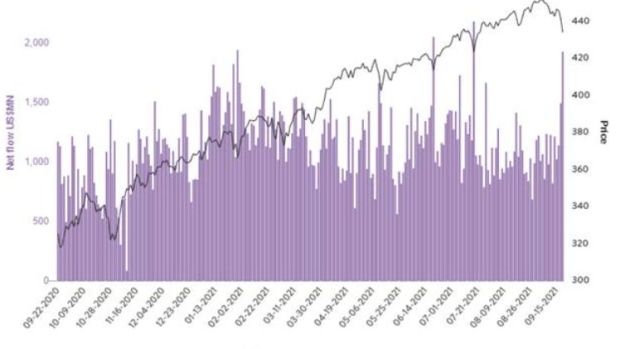 (Bloomberg) -- Retail investors took advantage of Monday’s market selloff to pile back into some of the largest U.S. exchange-traded funds and bank stocks, bucking some worries that the group would let stocks tumble.

Individual investors bought a total of $1.93 billion worth of assets Monday, the fourth-largest net buying since the start of the pandemic, according to data from Vanda Research, a firm that tracks retail-trading flows in the U.S.

Buying from the day-trading crowd was mostly concentrated in ETFs that track closely-watched U.S. benchmark indexes, including the SPDR S&P 500 ETF Trust (ticker SPY) and Invesco QQQ Trust Series 1 (ticker QQQ), which saw combined inflows of $337 million, according to Vanda’s Ben Onatibia. Separate data from Fidelity showed the SPY fund and Apple Inc. shares were the most bought assets on its platform Monday.

The data suggest that retail investors are still taking advantage of weakness in broad markets, particularly in megacap tech stocks, to increase their holdings in spite of a jump in volatility.

Large U.S. investment banks were also among the most bought companies, while bigger institutional investors were likely selling, Vanda said. Citigroup Inc. and Bank of America Corp. were among the top ten members in terms of inflows Monday.

A surprise in the Vanda data came as individuals were selling shares of airline companies like American Airlines Group Inc. and Delta Air Lines Inc., Onatibia wrote. That selling “means institutional investors were on the other side of the trade, building exposure to the reopening trade.”

Day traders also snapped up shares of so-called meme stocks despite the group’s worst day in months. Favorites like AMC Entertainment Holdings Inc. and GameStop Corp. saw continued interest, but newcomers like SmileDirectClub Inc. were also bought, Fidelity data show. The three stocks were among the most traded companies on Monday and edged  higher on Tuesday.

Nicholas Colas, co-founder of DataTrek Research, said the return of retail traders buying the dip was an “important observation,” given their impact on stock markets in 2021.