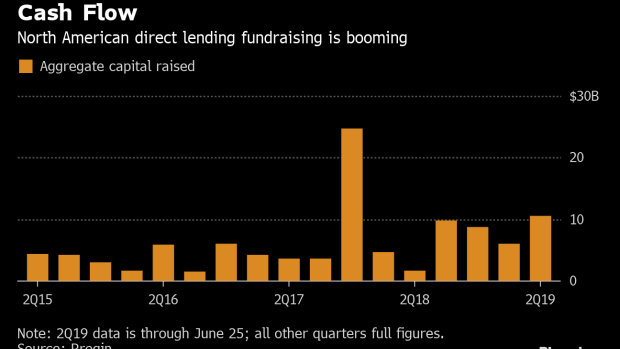 Pedestrians walk along Wall Street near the New York Stock Exchange (NYSE) in New York, U.S., on Friday, May 24, 2019. U.S. equities climbed at the end of a bruising week in which escalating trade tensions dominated markets. Photographer: Michael Nagle/Bloomberg , Bloomberg

(Bloomberg) -- Funds raised for direct lending hit a fresh high this year, raising concerns the market could be running a little hot amid the deluge.

Direct-lending funds focused on North America snagged a total of $16.6 billion through June 25, compared to $6.4 billion in the same period last year, according to research firm Preqin. The level of activity -- the highest for a first-half on record -- is fueling heightened competition that’s putting pressure on valuations, according to some investors in the space.

There’s a risk that corporate leverage, debt in relation to earnings, is much higher than it seems, according to Stevenson. As companies get bolder with adjustments, it may make earnings appear stronger, he said.

The second quarter -- where nine funds raised $10.5 billion -- was the largest for any such period since the fourth quarter of 2017, when 24 funds raised $24.8 billion. MGG Investment Group, Twin Brook Capital Partners and Star Mountain Capital are among the direct lenders to offer new funds.

And fundraising could get even stronger in the second half as money managers shore up resources for 2020, according to Tom Carr, head of private debt at Preqin. The continuing growth is a function of yield-starved investors who’ve tried to eke out returns stronger than their fixed income holdings, according to Carr.

That said, while heightened competition in North America has led to some deterioration in terms and pressure on yields, investors are still willing to invest, according to Carr. Returns in the asset class are more stable than other parts of the credit market, he said.

“It’s all conversations that are being had, but not yet having a material impact on fundraising,” he said. “We do actually think markets in Europe and part of Asia are becoming more attractive as North America gets quite competitive,” he said.

A robust pipeline of private equity activity including mergers and acquisitions and some industry consolidation is supporting upcoming deal flow, said Albert Periu, chief executive officer of lower middle-market lender Neptune Financial Inc. He expects that to continue through summer and as sponsor-backed deals close in September and October, for the end of the year as well.

“It’s going to be a working August,” he said.

An increasing presence of direct lenders in the syndicated loan market is another trend that will likely continue. Goldman Sachs Group Inc.’s private investment arm and HPS Investment Partners recently stepped in to provide a $1.25 billion loan to finance Ion Investment Group’s purchase of financial data provider Acuris -- after UBS Group AG was originally due to provide the debt commitment.

To contact the reporter on this story: Kelsey Butler in New York at kbutler55@bloomberg.net

To contact the editors responsible for this story: Natalie Harrison at nharrison73@bloomberg.net, Sally Bakewell, Christopher DeReza