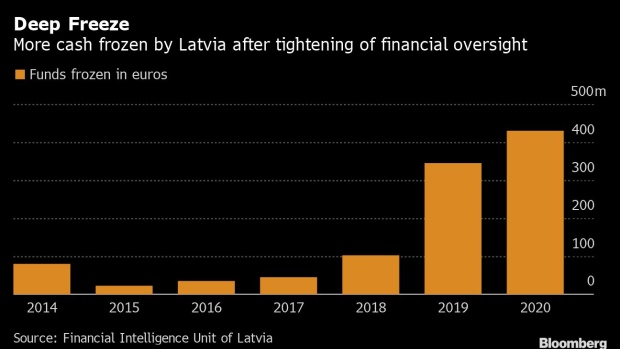 (Bloomberg) -- Flows of illicit money are continuing through new channels after Latvia shut banks and instituted a crackdown, the head of the nation’s anti-money laundering watchdog said.

Authorities imposed strict measures on the financial industry, which at one point handled as much as 1% of U.S. dollar flows. Scrutiny increased when the U.S. Treasury accused a local lender of money laundering and handling money for North Korean shell companies in 2018.

“Where are those flows now? They are definitely continuing to circulate in Europe and of course the world,” Ilze Znotina, director of the financial intelligence unit, said in an interview. “We unfortunately have to start to think a lot more about different financial services, for example payment companies, e-money companies” and virtual money providers that have taken on handling the flows, she said.

The next step is taking the cases to court for rulings on whether the money can be seized and transfered to the state budget. The coronavirus has slowed the process, but this year a new court dedicated to economic crimes began work.

The crackdown on illicit finance is winning some praise. The European Commission in its review of EU nations cited only one field where Latvia had shown substantial progress, in the fight against money laundering. Moody’s Investors Service also lauded the euro-sharing Baltic country when it affirmed its rating at A3, the sixth-highest investment grade rating, this month.