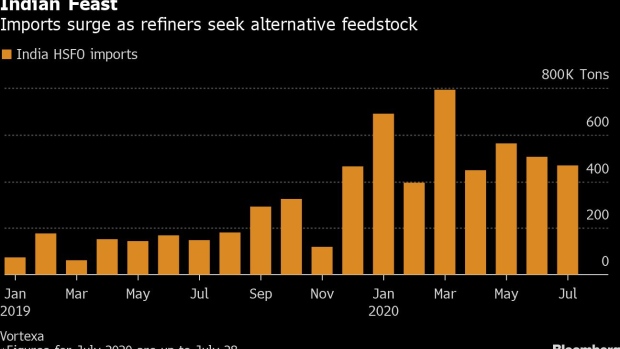 (Bloomberg) -- An unexpected demand boost for dirty fuel oil is poised to ease with the return of some OPEC+ crude supply from this month.

Cuts by the producer alliance combined with sanctions on Venezuela and Iran, hitting supplies of heavier crude and forcing processors from the U.S. to India to boost buying of high-sulfur fuel oil to use as an alternative feedstock in their refineries. Typically a by-product of crude refining, increased demand upended trade flows and drove the market into a deep deficit, but supply is expected to become more abundant as refiners switch back to crude with OPEC+ opening the taps.

While a large chunk of the fuel was previously used to power ships, consumption has waned after new regulations were implemented this year mandating vessels use cleaner burning fuels unless they are fitted with expensive pollution kits. The recent demand surge also coincided with a seasonal boost from the Middle East, which imports fuel oil for use in electricity generation during the hotter summer months.

Saudi Arabia has been forced to tap alternative markets for its power-station fuel due to intensifying competition, while Indian high-sulfur fuel oil purchases more than tripled through January to July from a year earlier. Shipments typically bound for Singapore from Europe and Russia have been diverted to the U.S. for refinery feedstock, said Serena Huang, a senior analyst with Vortexa Ltd.

Refiners in Thailand and South Korea have also purchased more fuel oil in recent months to use as an alternative feedstock, according to traders familiar with the matter. The timing of their imports was in-line with sharp cuts to supplies from nations such as Saudi Arabia and Iraq, two producers that tend to export sulfurous and high-density crude.

The market tightened to a deficit of more than 500,000 barrels a day last month, more than the five-year average, according to JBC Energy. The shortage is expected to ease to a “more normal” 100,000 barrels a day by the end of the year, said JBC, while Wood Mackenzie Ltd. also sees supply tightness moderating. Refiners can use fuel oil as a feedstock for secondary units at a plant to produce fuels such as diesel and other higher-end products.

Complex refiners such as India’s Reliance Industries Ltd., PetroChina Co. and Sinopec, which have the secondary units to upgrade fuel oil, would benefit the most because they have the flexibility to use the alternative feedstock when heavy crude isn’t available, said Sushant Gupta, research director of Asia Pacific refining at Wood Mackenzie. That compares with simple refiners in Europe that had to shut down or cut run rates after crude became too expensive, according to JBC.

However, as OPEC+ rolls back historic curbs and return more supplies to the market, refiners tailored to process heavy-sour crudes will revert to the more familiar feedstock, reducing their purchases of fuel oil.