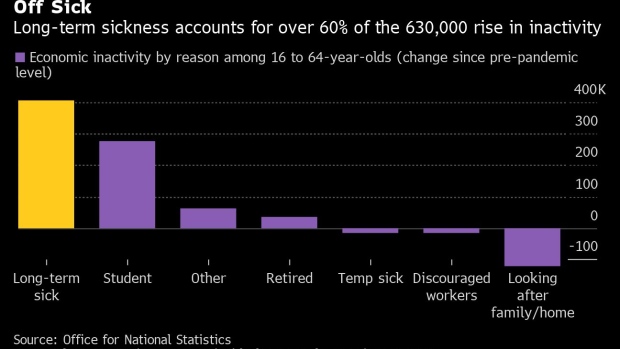 BATH, ENGLAND - FEBRUARY 16: A sign is displayed above a disabled car parking bay on February 16, 2011 in Bath, England. The government is currently considering a range of measures after it was revealed that the system - which allows badge holders free parking in many pay-and-display bays, at meters and on single- and double-yellow lines - was being widely abused. Currently, over 2.5million people qualify for the scheme, but research has shown that over a half of users are not entitled to use them and that there is widespread fraud and abuse involving the badges. (Photo by Matt Cardy/Getty Images) , Photographer: Matt Cardy/Getty Images Europe

(Bloomberg) -- The number of Britons claiming disability benefits has doubled in a year, according to new analysis that underscores the ill-health crisis gripping the country.

The study by the Institute for Fiscal Studies found claims surging in the year to July for all types of disability and across all age groups. Teenagers saw a threefold increase, with many of them reporting mental or behavioral conditions.

The puzzling increase has serious implications for both the public finances and the labor market, as well as the already-stretched National Health Service. It adds to the Bank of England’s concerns about the shrinking number of people available to work as businesses struggle to fill vacancies.

Britain spends £15 billion ($18 billion) a year on working-age disability benefits, and that figure is set to grow by several billion in the next few years. At the same time, chronic shortages of workers are driving up wages and fueling inflation, with long-term health issues most commonly cited among those who are not part of the workforce.

“Almost as remarkable as the rise in disability benefit claims itself is how widespread it is,” said Sam Ray-Chaudhuri, a research economist of the IFS and an author of the report. “We see a doubling in claims at essentially every age and for most major conditions, from mental illness to arthritis and back pain.

“Worsening health seems to be behind the rise, but precisely why health is getting worse is a puzzle of its own. Whatever the cause, significantly greater spending on disability benefits looks like it will be one of the consequences of this concerning trend.”

The IFS study centers on the Personal Independence Payment, a disability benefit that aims to support individuals facing high living costs due to difficulties in mobility or carrying out everyday tasks. They are not income-related and can be made to those in work.

New applications held steady for year until early 2021 at around 15,000 a month. However, by July this year the number had doubled to 30,000 and there are no signs of a slowdown.

The jump appears to reflect more people in ill health, with no evidence that the assessment system had become less strict, the IFS said.

The problem has been acknowledged by the Office for Budget Responsibility, which last month predicted that rising ill health will add £7.5 billion to welfare spending by 2026-27 amid a jump in caseloads.

According to the IFS: